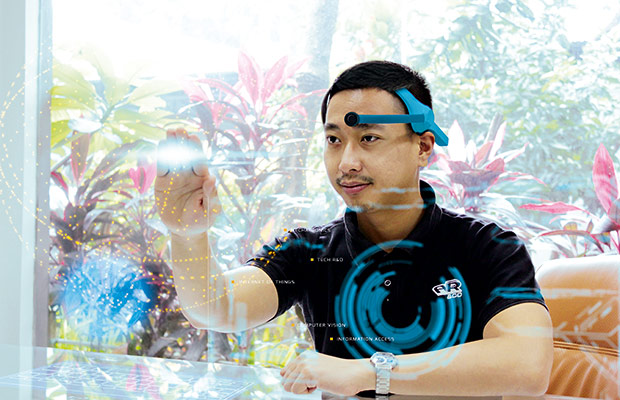 In the future, information will float around us – so says Michael Budi, CEO of augmented reality firm AR&Co: “From the establishment of AR&Co, we have seen the future as lying in this direction, and someone needs to start breaking the norm. We have to make people ready to adapt to this technology as it becomes a part of their lifestyle. It is our vision, as a company, to not only become the biggest, most notable player in Asia, but also the key figure in transforming humanity.”

AR&Co entered the marketplace in 2009, with augmented reality as part of its initial specialisation. “In Indonesia, we can be considered a pioneer in the industry,” says Budi, “and it took some time to educate the market before consumers started to understand its potential. Although many use augmented reality as part of their brand marketing campaigns, they have started to see other possibilities of utilising this technology.”

WIR Group is the holding company of AR&Co and, according to Budi, has always believed in innovation: “We always explore new ways, new channels, new platforms that will help establish our clients’ brands as strong living entities. At the same time, the top management always challenge themselves on how they can further advance humanity.”

Daniel Surya, Group CEO of WIR, says: “We have the vision to become Asia’s most out-of-the-box, brand-led innovative media, technology and entertainment group. Therefore, we have to be courageously creative and innovative for both the B2B and B2C markets.”

The effect on businesses
Peter Shearer Setiawan, the Managing Director of AR&Co, explains how “augmenting the real world with virtual objects in real time” can reinforce branding initiatives and increase marketability: “The way [augmented reality] works in general is by recognising a design or shape, such as a print ad, in order to trigger a virtual object that appears on top of it – we can even use our facial features to trigger virtual objects. You will see the virtual object in real time through the screen, and from various angles, as if the object is really there.

“We can distribute the application from smartphones and tablets up to broadcasting usage. Through highly creative content, one impactful augmented reality implementation will change the way you interact with brands. Not only will awareness be increased, but, at the same time, the interaction will be at a personal level – thus increasing brand loyalty and retention.”

Setiawan says the potential for the business to expand is tremendous: “Today, a study may say that only 0.1 percent of the population are using augmented reality, but that share is forecast to grow to one percent in the coming five years… More categories of application will incorporate this technology, such as retail, travel, gaming and many others. The growth will be exponential. A study mentioned the revenue will grow from $181.25m in 2011 to $5.16bn by 2016, at a CAGR of 95.35 percent from 2011 to 2016.”

Beyond augmented reality
Senja Lazuardy, AR&Co’s Head of IT, says: “We don’t want to be seen simply as a developer, but also a content creator. This differentiates us from some of the competitors. Each client has a specific set of objectives that we really need to consider. So each application has to be fully customised.”

R&D is about questioning everything around us, rejecting it and finding new directions through technology

AR&Co has therefore started to work with other technologies beyond augmented reality. Senja explains that his team of programmers and developers are not solely augmented reality specialists, but also experts in automation, robotics and neuro-control mechanics: “I see these as exercises and experimentations to reach a new milestone in augmented reality applications. Through all the creative ideas given to us to be solved, I have seen that this platform is indeed very flexible when it comes to implementing it… As technology advances in many areas, so does augmented reality.”

AR&Co’s creative augmented reality solutions include 4D effects and controlling game applications through neuro-sensing devices. The team equip themselves by researching what is already out there and having regular brainstorming sessions to come up with new possibilities.

AR&Co has been involved with a number of Asia’s upcoming theme parks – including the Cartoon Network Amazone waterpark in Thailand – and recently launched an e-cash system with integrated augmented-reality application.

The application, named Wildlife Care, is produced in partnership with the RedSpace creative agency and WWF Indonesia. It allows the user to pet a digital version of an endangered animal by purchasing food and tools with e-cash. Through augmented reality technology, the user can see their animal come alive on top of their ATM cards in real time.

Preparing for and shaping the future
Nobody can imagine what will be next for augmented reality. The rise of wearable technology – such as Google Glass, smart watches and Oculus Rift – is giving us new ways to access information and interact with our surroundings.

Chief Innovation Officer of AR&Co, Jeffrey Budiman gave his perspective on why the R&D division plays a vital role in preparing the company for the future: “Like Albert Einstein said, ‘Imagination is more important than knowledge’. R&D is about questioning everything around us, rejecting it and finding new directions through technology. Some of the initiatives we have in the pipeline may look like science-fiction at first. The vision is big: that is, to advance humanity and give smiles to many.”

Currently, the R&D division has to fulfil a certain number of patent registrations every month. Budiman says: “We have set milestones for each of the R&D initiatives and ensure all of them are commercially feasible. By utilising these correctly through our various commercial projects, people will slowly adapt to the transformation of the world around them.

“For AR&Co, innovation does not stop at augmented reality – it will be one of many elements that will shape a bigger platform. This new media channel will enrich the world we live in, erase the concept of space, time and distance – a new platform that will delete the notion of there being a ‘virtual’ and a ‘reality’.”

The global marketplace
AR&Co has, through its various projects, proven itself in the marketplace. Setiawan says: “Our clients have come from various parts of the world. We have sent our team to key cities such as Hanoi, Yangon, Singapore, Kuala Lumpur and Hong Kong, among many others. We have an office in Barcelona to serve the surrounding market. Recently, our portfolio has been exhibited at numerous events, including the Frankfurt International Book Fair and IAAPA Attraction Expo.”

The company has been recognised with a number of awards, including at video game shows, marketing events and augmented reality awards. Budi says: “Not only that, we are very happy that we can make our country proud. It is all about preparing a future platform for humanity through technology.”