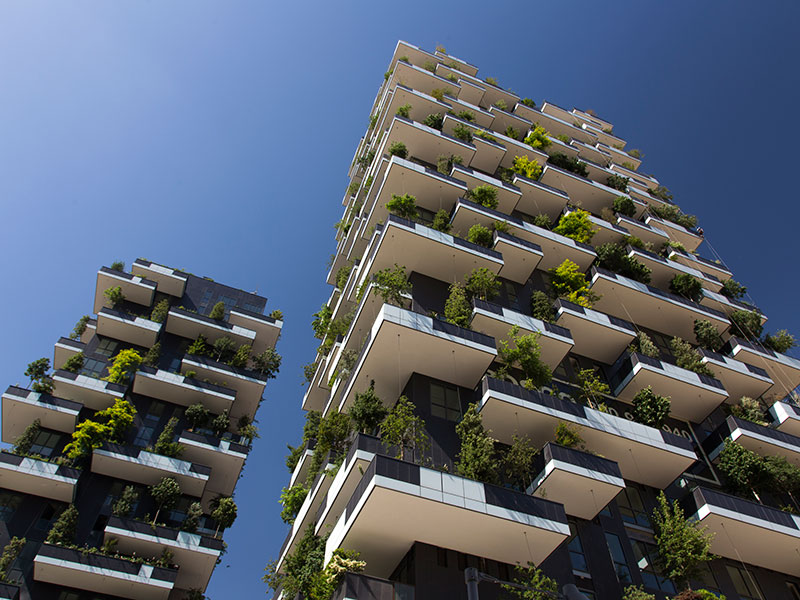 The gradual global economic upturn of recent years has aided a construction boom. In the US alone, new developments contributed over $647bn to the economy in the third quarter of 2017, after several bullish years.

This trend shows no sign of abating: in 2018, we will see a series of innovative and expensive commercial real estate projects set new records. For instance, the world’s tallest building will be erected in Dubai, and there are plans to construct a skyscraper town around it.

Among such developments, striking new builds demonstrate how design is adapting to changing commercial and environmental demands.

Raising the roof
For Daniel Safarik, Editor at the Council on Tall Buildings and Urban Habitat, the enduring interest in skyscrapers goes beyond the simple economic advantage of using less land and results from the buildings’ intrinsic appeal. Safarik told The New Economy: “[A marketable, iconic skyline is about] monetising the emotional resonance of building towards the sky that has occupied the human imagination since the Tower of Babylon.”

Radical new projects are seeking to capitalise on this effect: New York’s emerging Steinway Tower is set to become the world’s thinnest skyscraper, while St Petersburg’s 462m-high Lakhta Centre will make a prominent stand for the enduring status of these ambitious builds and their allure for investors.

But increased infrastructure budgets seem to be paying dividends in innovation too, as bold designs replace traditional models. Portland, for example, will house the world’s first timber skyscraper when Lever Studio’s $29m construction, Framework, is completed this year.

The purpose skyscrapers fulfil has changed, from demonstrating the power of individual corporations to projecting the growth ambitions of nations

Then there’s the Vessel, a honeycomb-shaped tower of interlocking stairs in New York’s Hudson Bay, which features in the largest private real estate project in US history and is tipped to become the city’s Eiffel Tower.

Although Thomas Heatherwick’s Vessel is no skyscraper – standing at just 150ft, it’s relatively modest when compared with Steinway Tower’s 1,428ft drop – the creative design at the centre of this $20bn development reinforces the centrality of monumental design to new commercial projects.

Built for good
Sustainable architecture is becoming pertinent for commercial real estate, with targets for CO2 emissions increasingly applied through building regulations. Niall Healy, Managing Director of Healy Cornelius Design and a member of the Chartered Institute for Architectural Technologists, said: “There are many examples of technical development which address how to consume energy efficiently.

“For example, there have been significant developments in the use of ground source and air source heating, where the energy consumed to operate the heating plant is a small proportion of [the] energy output they deliver.”

Other developers have taken a more literal approach to ‘green’ architecture, as demonstrated by Stefano Boeri’s upcoming Green Towers in Nanjing, China. The towers are based on the same principle as the Italian architect’s Bosco Verticale (Vertical Forest) in Milan, which is cloaked in 2,500 hanging plants and incorporates 1,100 trees from 23 different local species. The construction of naturally-carbon-dioxide-cleansing towers follows China’s nationwide drive to reduce pollution.

Meanwhile, in snowy Copenhagen, Bjarke Ingels’ power plant will prove industrial builds can afford to be playful. Amager Bakke’s quirkiest feature is a ski slope that employees can access via the roof. But the plant still has profitable sustainability at its core: the aluminium-coated structure is expected to burn 400,000 tonnes of waste, creating enough clean energy to service 60,000 local homes per year. Architectural choices thus embody changing government policy here too, as Copenhagen has committed to become the first zero-carbon city by 2025.

In contrast with ambitious construction projects like the Hudson Yards development, the average Manhattan building is 56 years old – and many of the city’s structures are starting to show their age. In another sustainable trend, developers are seeking to renovate these stale commercial properties – which have low ceilings, thin glass, cellular structures and a generally out-dated corporate feel – rather than demolishing them and starting from scratch.

Boston Properties, for example, is investing close to $100m in order to revitalise the ageing 399 Park Avenue skyscraper, which will include a bicycle valet service for employees.

Renovation innovations
As well as putting a squeeze on pay rates, the 2008 financial crisis witnessed office space diminish, with organisations leasing fewer square feet per employee. The average space allotted per US worker has been reduced by nine percent in the past seven years, falling to 181sq ft. But today, generally improved employment rates mean firms are increasingly investing in building design to attract and retain talent.

An evolving workforce has also driven demand: Millennials became the most-represented generation in the US labour force in 2015, and a Deloitte survey has suggested this demographic prefers flexible working environments. Although office space has been reduced, the collaborative spaces preferred by Millennials have, in fact, offset some of the impact.

US start-up Convene specifically redesigns buildings with Millennial-pleasing features, such as conference rooms stocked with gourmet food and micro-brew coffee bars. CEO Ryan Simonetti told The New Economy: “[Convene] is pioneering the concept of ‘workplace as a service’.”

While the company primarily serviced Fortune 500 companies initially, the economic upturn has prompted a rise in demand from a variety of employers. Simonetti said: “Our future workplaces won’t just be desks that we go to, but places we are inspired to be in – and we can’t get there without massive changes in physical space and services provided at office buildings.”

While designers will consistently produce ambitious plans, the speed of their implementation depends on economic cycles

The employee-centric model features atria, pop-out spaces and sky gardens. “[This will] accommodate a greater desire for connectivity – between street life and the commercial life of the building, and between occupants,” Safarik said.

These renovations are less gimmicky than the office slides and indoor lawns of the 2000s, with developers favouring more pragmatic perks, such as on-site showers for those cycling or running to work.

Building futures
Many of the breathtaking builds set for completion this year took years to develop and were designed before the upturn in the wider economy. According to Healy: “Construction in general is one of the earliest sectors to be influenced by a shift in the economy.

“Even projects which are on the drawing board for a very long time will not necessarily be implemented until the economics point in the right direction.”

The long delay in the development of London’s Canary Wharf after Canada Tower’s erection was a consequence of developers waiting for such an economic upturn. While designers will consistently produce ambitious plans, the speed of their implementation depends on economic cycles.

Sustainable trends are not just consumer friendly, but profitable too. Developers choosing to renovate instead of demolish old builds waste less capital, while the demand for sustainable design is growing. Last year, there were 65,000 LEED-certified projects in the US, representing a market of $81bn.

A significant development in commercial real estate is that of shifting attitudes. Safarik notes the purpose skyscrapers fulfil has changed, from demonstrating the power of individual corporations to projecting the growth ambitions of nations. Current sustainable design trends, therefore, reflect an environmentally-focused national agenda.

Crucially, architects producing pioneering commercial structures and developers reimagining offices for a new generation of employees echo that change too. From architecture to interior design, a traditionally corporate focus is giving way to the comfort – and even inspiration – of the employee.