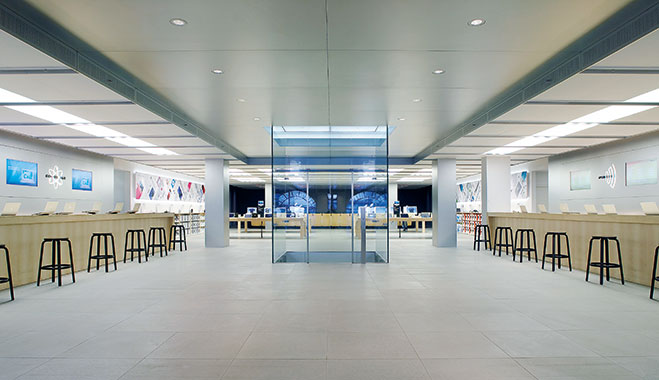 Above Apple’s Genius Bar. Microsoft has emulated the concept by setting up its own in-store information desk to solve customer issues

In an attempt to lure shoppers away from their computer screens and out onto the high street, more and more shops are investing in the concept of ‘retailtainment’. The key to making a retail store attractive is using the company’s brand image to make the shop interactive, accessible and engaging on a human level, directly appealing to its target audience.

Many parents have fallen victim to their child dragging them towards the cartoon fantasy worlds that come alive in the Disney Store in the form of 30ft castle climbing-frames and store assistants posing as their favourite characters.  Alternatively, over the road at American clothes retailer Abercrombie and Fitch, topless male models pose for complimentary photographs with swooning teenage girls before ushering them into a shopping environment that emulates a nightclub. And then there is Apple, pioneers of the technology store shopping experience, whose retail stores are as cool and contemporary as they are accessible and intimate.

Planting a seed
Apple has successfully transferred the intuitive but user-friendly interface boasted by its electronic products to its bricks-and-mortar premises. The strategy has worked thanks in large part to the initiatives of retail guru Ron Johnson. The New York Times has credited Johnson as the man who “turned the boring computer sales floor into a sleek playroom filled with gadgets”.

As Senior-Vice President of Retail, Johnson helped Apple magnate Steve Jobs open the first Apple Store in Virginia in 2001. The following ten years saw him reinvent the retail process, focusing on allowing shoppers to have a more hands-on approach to trying out products in store and fostering a more engaging retail environment. Today, Apple is the most valuable retailer in the US, selling $6,050 of merchandise per square foot: more than twice that of high-end jeweller Tiffany & Co, which makes around $3,017 over the same area in their stores. But according to Johnson: “The interesting number, though, to me, is not the financial results, but it’s the people who come to our stores, because ultimately a store is about customers. And just as Peter Lynch used to say: ‘Where the people are, that’s where the action will be.’ That’s the nature of our stores.” Considering the last quarter of 2012 saw 120 million people visit Apple’s 400 global stores – which equates to around 17,400 visitors per store per week – you would think the company could rest assured.

However, since Johnson left last year for an unsuccessful stint at struggling department store chain JC Penney’s, there are fears Apple’s tried and tested retail strategy is becoming stale. A recent study by Asymco shows the percentage of sales from Apple Stores dropped from 17 percent in 2007 to 12 percent in 2012.

This dip in store sales could be due to the fact that Apple has recently slowed its rate of store openings, as the novelty of new sites always attracts more customers. Or perhaps customers have simply become disenchanted with the checkout-less open plan stores and the overtly friendly staff, choosing to make their purchases at the click of a button online. Either way, now is the time for rival companies to close the gap on Apple.

Genius vs Guru vs Experience
Rather than challenge the successful retail model laid down by Apple, Microsoft and Samsung appear to have chosen to simply emulate it. All companies have laid a heavy emphasis on customer service: a vital cog in the retail machine. Investing in staff to assist clientele and provide a friendly and informative service is key in attracting customers to physical stores rather than shopping online.

For those who are not up to speed with the latest technology, the experience of buying a new phone, media player, tablet or computer can seem daunting. Apple pioneered a sales approach that saw friendly staff who weren’t tethered to desks offer help and advice without seeming patronising. They also originated the in-store technical support model in the form of the Genius Bar.

Eyebrows were raised when plans were leaked prior to Microsoft’s grand opening of its first branded store in Arizona boasting a ‘Guru Bar’. They wisely abandoned the imitative label, but kept the presence of an Answer Desk, and employed technical advisers and specialists to show customers how to get the most out of their software.

The concept is strikingly similar to Apple, but in a bid to go that bit further and seem more inclusive, clients can bring any Microsoft product to the desk, not just those purchased in-store. Despite abandoning the Guru label, the advisors profess to be able to help with any problem, from Outlook not downloading emails, to teaching how to stream music to an Xbox and by offering free tutorials and workshops. It even offers Tech Tots programmes, simultaneously fulfilling its corporate social responsibilities and targeting its youngest demographic.

On the other hand, Samsung is only just embarking on standalone shops on a global scale, and so are testing the waters in the US with ‘Experience Shops’. The store-within-store stands will feature in 1,400 of electronic chain Best Buy’s outlets. Dale Sohn, President of Samsung Telecommunications America, enthusiastically claimed: “Consumers will have one place to not only explore and learn about our full portfolio of mobile products, but also the support of a Samsung expert to help with selecting and servicing them. This will truly be a unique mobile shopping experience.”

It is quite a stretch to describe the Experience Shops as a unique retail concept. The shops showcase smartphones, tablets, laptops and accessories in a very similar manner to the Apple model, with store assistants even sporting the same blue t-shirts as Apple Geniuses. In addition, the past year has seen Samsung open a further 100 Experience Shops throughout China within Suning department stores. Apple boasted many successful stores-within-stores before embarking on devoted retail spaces, so this could perhaps be a sign of bigger and better things to come from the Korean technology giant.

Brand focus
Samsung is dipping its toe in the global pool of single-brand retail stores. The past six months have seen the first Samsung Mobile brand store open in Delhi and new Concept Stores in Pakistan, Australia and Canada, which sell all Samsung goods, from mobile phones to washing machines. This plethora of products could present a stumbling block for Samsung; it makes more products than Apple and Microsoft combined. While its Concept Stores are a great showcase for its broad range of technology, if it is serious about competing with Apple on a retail level, it needs to focus its attention on mobile brand stores.

Samsung already beats Apple purely in terms of global sales – and has done ever since the Galaxy S III outsold the iPhone to become the bestselling smartphone in the world. Apple’s success in retail can be attributed to the fact it is selling a brand and focusing on fewer products, aiding the sleek, minimal appearance of its stores. In fact, Johnson claims this is what helped to establish Apple’s retail strategy, as they began with just four computers.

Johnson said: “That was a challenge. But it ended up being the ultimate opportunity, because we said, we don’t have enough products to fill a store that size; let’s fill it with the ownership experience. So we quickly moved from a buying experience to an ownership experience: Genius Bars, theatres, and face-to-face help and friendly people. But we had a liberty most retailers don’t have [because they] are overstuffed with products. You know, you don’t have the space to innovate.”

Microsoft faces a different retail quandary, as it is essentially a software corporation. Its profits from retail stores are weak compared to Apple and Samsung because it is largely reselling other companies’ devices, such as Nokia and HTC phones running Windows Phones software and Samsung laptops supporting Windows 8. Catching onto this, Microsoft opened a series of 30 pop-up shops across the US from October to January to coincide with the festive holiday shopping period and the launch of its own-brand Surface Pro PC/tablet hybrid.

The most prominent of these was based in Times Square, the commercial epicentre of New York. In a similar fashion to the launch of Apple’s iPad, the buzz around Surface manifested in crowds gathering outside the shop and standing in line to get their hands on the new product the moment it came out. If Microsoft can continue to build up anticipation around new products, it may well be the driving force it needs to get its foot in the door of the bricks-and-mortar retail world.

Rumours have surrounded Google regarding the launch of its own chain of retail stores since it embarked on more tangible products, such as its Chromebook, Nexus phones, Google TV and the much talked-about Google Glass. However, in a similar predicament to Microsoft, the physical components of the Chromebook are manufactured by Samsung. Google TV has not sold well following poor reviews and a commercial version of Google Glass headwear is yet to come to fruition.

Only the Nexus phones would benefit from the presence of Google-branded retail stores, but strong sales under larger technology companies would soon make the stores obsolete. In February, Andy Rubin, co-creator of the Android platform, flatly denied the rumours: “Google has no plans, and we have nothing to announce.” He also downplayed the value of bricks-and-mortar retail in the digital age, saying customers “don’t have to go in the store to feel [products] anymore”.

Destination shopping
Ultimately, the challenge of attracting customers into shops remains. Making the physical retail space an attraction can be a draw in itself. The sleek, modern appearance of Apple’s stores speaks volumes for the retail experience offered over the threshold. PC Magazine has even created a bucket list of Apple stores around the world that no one should miss out on seeing, including New York’s Fifth Avenue Store, Paris’s Carrousel du Louvre location and Asia’s flagship store in the Ginza district of Tokyo.

Aside from Microsoft’s 44 stores in the US, its Times Square pop-up location became fairly iconic in the short time it was open, but ultimately failed to make the transition to a permanent store as visitor numbers dwindled after the new-year period. Cosmetically, Samsung’s first North American retail store in Vancouver was praised for its clean, minimal appearance, bathed in Samsung-blue ambience lighting. Its Sydney and Melbourne stores are also gaining kudos, but time will tell if it is enough to keep customers interested.

Samsung may well have to turn its back on its US stores-within-stores concept unless Best Buy can square up to the mass discounts offered by online retailers. As Samsung looks set to expand, Best Buy may be forced to close stores to keep costs down – once again pointing to the mobile brand store solution for the Korean company.

In the words of Steve Jobs, retailing is hard. But Apple has proved that, with the right approach, electronics shops can flourish in the face of retail’s ultimate foe: the internet. As Samsung and Microsoft begin to fill shop fronts across the US and carve out their own retail strategies off the back of Apple’s tried and tested method, shopping centres may soon be a veritable feast of own-brand consumer electronic stores.