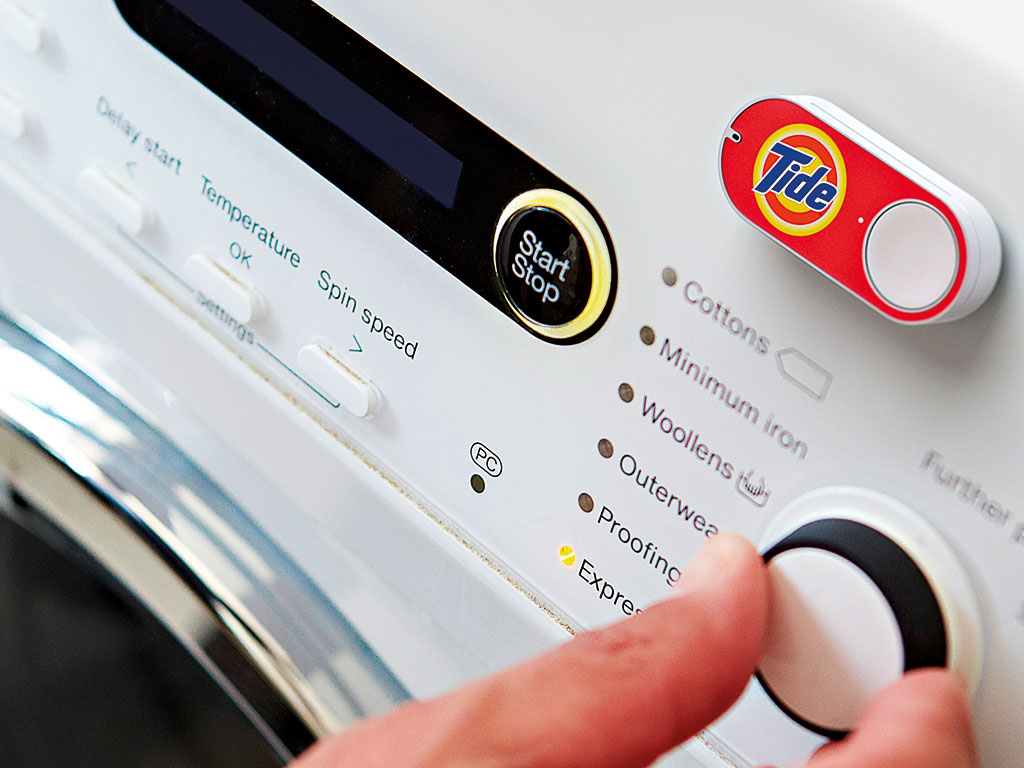 Once delivered, the Dash Buttons can be placed wherever is convenient for the user

“We’re seeing increasingly, through a lot of the research that we have done at Millward Brown Digital, that when consumers go online to a retailer like Amazon, it’s a lot harder for brands to stand out in the endless aisle”, said Jason Caine, the group’s Vice President for Retail and Consumer Goods. In order to differentiate themselves from rivals, companies are under growing pressure to add complementary services and maximise functionality for customers.

The Internet of Things, a term that is gaining traction with each passing week, presents a whole host of new opportunities for business, and certainly retail. By linking home automation with e-commerce platforms, consumers are presented with tools that can make household management far easier.

Of smartphone owners use their phone to shop

In line with this new technological offering, Amazon has recently unveiled Dash, a small button that enables customers to bypass traditional shopping routes. Some argue Dash will be a short-lived experiment, but Amazon is not alone in adopting interface-free shopping. In fact, recent consumer trends indicate a transition is currently taking place that heralds a new future for retail.

First to dash
For a fee of $4.99 Prime customers can receive an Amazon Dash Button, a tool that allows them to order a product with a simple touch, without the need to fire up a laptop and certainly eradicating any compulsion to visit an actual shop. Once configured with the individual’s payment details and shipping information, the small plastic button can be placed anywhere in the house.

At present, a small group of brands can boast their own Dash service, and consist mainly of household and personal items, such as Bounty paper towels and Huggies diapers. Presumably, the button is placed in correlation to the product it orders – inside a kitchen cupboard for Maxwell House coffee and affixed to a washing machine for Tide laundry detergent – in order to save the consumer precious seconds when moving around their home.

Once the button is pressed, a green light flashes to indicate the order has been processed and that the desired product is on its way. Fortunately, the mechanism only allows one order at a time in order to save parents the shock when 20 cases of Gatorade land on their doorstep, courtesy of their trigger-happy infants. But those seeking instant appeasement must be warned that delivery is not as prompt as they might assume: at present there is a mammoth waiting time of 48 hours.

While Amazon’s latest shopping aid screams laziness, its convenience does hold appeal, certainly for frequently used items that often run out before the next general shop. In contrast, however, to the Amazon ethos of unlimited choice, the Dash Buttons themselves are surprisingly restricted, not just in terms of the brands on offer, but also as only a small set of sub-categories is offered when first setting up the wireless mechanism. Furthermore, the options given with Dash lack the money saving options that are available online.

Buy now!
Amazon is not the only proponent of interface free shopping; neither is Dash Amazon’s first foray into the field. Unveiled in March, Amazon’s Dash Stick allows consumers to speak their grocery orders to a wand, which are promptly received in store. The company’s wireless speaker, Echo, acts as a virtual assistant that carries out a variety of tasks through voice demands – which of course can include orders on Amazon.

Google is the other formidable giant that has made a recent play at the zero interaction shopping experience with the ‘buy’ button it announced in July. The new feature, which appears at the top of an online search, allows a mobile phone user to purchase an item with pre-stored information, without even entering the retailer’s website or leaving the Google domain. Retailer concerns about losing out on direct communication with consumers have been somewhat eased by Google’s pledge to heavily feature the retailer’s branding on the product pages and provide recommendations from the company’s website. Google has also assured its retail partners that its buy button will increase conversion rates (i.e. more purchases will be made as a result of an online search).

Despite qualms from various retailers, Google’s move is crucial given current trends in mobile e-commerce. A 2013 report by the Google Shopper Marketing Agency Council stated “79 percent of smartphone owners are ‘smartphone shoppers’”, and that most consumers use their mobiles as a shopping assistant, even when actually in a store. Moreover, as mobile screens provide less ad space and cheaper ad rates than desktops, the mobile-friendly solutions will be increasingly important.

Path to purchase
Some may argue Google’s buy button and Amazon Dash are experimental ventures that are just the latest way to influence consumers to spend money, particularly as they lack the tangibility or the process of a conventional payment. Yet it is difficult to deny interface-free shopping indicates the way retail is heading. “It certainly seems like we’re moving in the direction where retail transactions are happening outside the walls of retailers”, said Caine.

Then there is Amazon’s upcoming Dash Replenishment Service (DRS), which takes a step even further than the Dash Buttons. Currently, household appliances, such as Britta’s water filter and Whirlpool’s washing machines, are undergoing an Amazon makeover so customers never run out of the complementary products needed to run the hardware. The DRS features either a physical button located on the appliance or an integrated system that can place orders when low levels, of say water filters or detergent, have been detected.

The convenience of DRS raises a number of possibilities for other products and services. “I think we’ve moved to a new phase where everybody in technology or retail is thinking about ways to change and disrupt a consumer’s path to purchase, to be at the right place at the right time”, Caine told The New Economy. As technology continues to infiltrate every interaction, the business sphere will increasingly use innovative tools that can encourage consumer activity and spending.

And, as Caine explained, interface-free shopping of the future may not be limited to the household: “Imagine opportunities where a consumer could just be walking down the aisle and buying products as they moved throughout the store, versus it being a single point of transaction prior to leaving.”

The future of retail is upon us: the technology exists, while the consumer attitudes and behaviours needed for this next step are at their peak. For those of an anti-capitalist sentiment, the way in which consumerism is changing us is a sorry tale, particularly as brands further permeate one’s home, urging money to be spent carelessly in split-second transactions. But for those who embrace change, technology, and above all convenience, Amazon Dash and Google buy buttons herald a new age in retail. One that saves mankind the one thing money cannot buy: time.