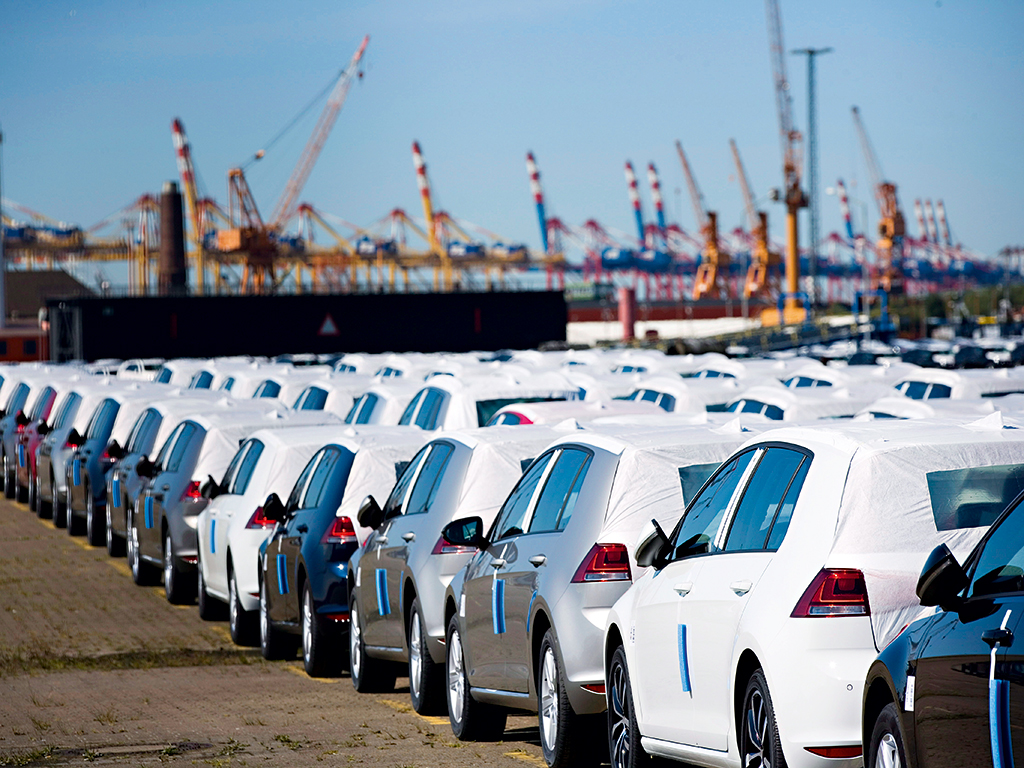 German cars ready for export. Germany's automotive industry is one of the most successful in the world, with three out of four built in the country go to international customers

People’s desire for individual mobility is cross-cultural and intercontinental. The world market for automobiles was predicted to grow by four percent to just under 76 million units in 2014, the US and China are on a growth track, and figures in Western Europe are beginning to climb again. The long-term prospects look good too. Experts estimate that, by the year 2020, the world market for automobiles will total 90 million vehicles.

What drives this desire for mobility? Mobility is evidently not just a basic human need; it can also be understood as a basic right. A look at the volume of traffic in, and gross domestic product of, Germany since the 1970s shows that, beyond all doubt, there is a close correlation between the mileage driven and economic output. Cars can thus be seen as a sign of prosperity, and a growth factor as well. This connection can be observed in other countries too: in Europe, Asia, and North and South America.

In recent years, the German automotive industry has consistently expanded its global position. It built 5.65 million new cars in Germany in 2014 – an increase of four percent on 2013. Production in plants located outside Germany is rising too – by five percent to 9.15 million cars. Consequently, some 14.8 million new cars will be rolling off the assembly lines of our manufacturers worldwide. To put it another way, around every fifth car sold worldwide bears a German group badge.

The export strength of Germany’s automotive industry is particularly pronounced. A good three out of four cars built in the country go to international customers. And every second car that we export from Germany is registered as a new vehicle in another EU country. Exports to Asia are continuing to rise too. It is this ‘two-pillar strategy’ that makes us so successful worldwide – strong exports from car-building sites in Germany coupled with expansion of international production in the growth markets.

Market shares are the ‘hard currency’ of this success. The German group brands have a 72 percent share of the car market in Germany, a 50 percent share in Western Europe, and a 46 percent share in the new EU Member States. On the large Chinese market, our share is 23 percent, and we account for around one fifth of the market in the Mercosur region, Mexico and Russia.

Behind this impressive presence on the world markets lies a strict innovations course, which our companies have been steering consistently for many years. The German automotive industry is a strong research performer. In the past year, German manufacturers and suppliers throughout the world spent €27.5bn on research and development, including €18bn in Germany. Our industry thus contributed a third to overall R&D spending in Germany. A major portion of this is channelled into developing alternative drive systems.

Cutting carbon
The success stories of the automotive industry to date, including the reduction of CO2 emissions, have been achieved with classic drive systems – in other words, clean diesel and petrol/gasoline engines. In order to master the challenges of the future, however, alternative drive systems will be indispensable.

The number of megacities is growing faster than the world population. While in the middle of the last century a good 70 percent of mankind still lived in rural areas, by the year 2000 the urban-rural ratio was already evenly balanced. According to UNO forecasts, by the year 2050 the ‘urban component’ will climb to 70 percent.

One answer to this change is electric mobility. Not only does it make us less dependent on mineral oil, it also creates mobility free of local emissions, so that, in a few years’ time, policymakers might be stipulating its use in major cities. Those who fail to keep up will only be able to watch the tail lights of competitors disappearing ahead.

No other automobile topic has dominated public discussion as strongly as electric mobility in recent months. We have reached a new milestone. Electric mobility is fit for the market. This young market is still small, but it is fast picking up speed, as is reflected by the growth rates in key countries.

Germany in the international context
International assessments show that, among the supplier nations, the German automotive industry is at the pole position for electrified vehicles. In no other country in the world do customers have a greater choice of new electrically powered models. German car builders alone have 16 series production models with electric drive on the market. In 2015, they will be joined by a further 13 models. We have not only highly innovative manufacturers, but also a strong supply industry, including Bosch, Continental and ZF Friedrichshafen. The many medium-sized companies, often family-managed, also provide us with a substantial competitive edge.

We are convinced electric mobility will prevail. Electric drives have enormous potential – especially in regions where short distances are travelled – and they can make a major contribution to environmental protection and emissions reduction.

That is why it is a good thing the Minister of Transport wants to introduce the first electric mobility law, which will ensure clear marking of electrified vehicles and launch special rights for electrically powered vehicles (for example, opening up bus lanes or preferential parking spaces). This is a first step; more need to follow. The grid of charging points must also become tighter. Now e-cars are on the road, we need easily accessible and easy-to-use charging stations. A uniform plug for filling up with power has already been developed.

Get connected
The second driver of innovation is networking. Cars and smartphones are already two sides of the same coin as the car becomes a mobile communications platform. This will make a crucial contribution to greater road safety, because the networked car ‘sees’ and ‘hears’ further than the driver ever could: with the help of web-based services, car drivers will be warned of traffic hindrances beyond the next hill. We are thus approaching the vision of accident-free driving, step by step.

There is a strong case for networking where comfort aspects are involved too. With the continuous expansion of already existing assistance systems, we are on the path towards partially or highly automated driving. This means that, on motorways or in stop-and-go traffic, drivers can delegate driving tasks to the vehicle. This relieves them of fatiguing work. When traffic speeds up, they can take over the wheel again.

The road to automated driving is not a revolution, but instead an evolutionary process that improves road safety and supports drivers even more than today. It is not only our car builders and suppliers who are cooperating closely in the field of networked driving: the IT industry is integrated too. Electric mobility and networking will make driving more efficient, climate-friendly and safer. But one thing will remain: the ‘pure fascination of cars’, the joy that is indivisibly linked with driving them.