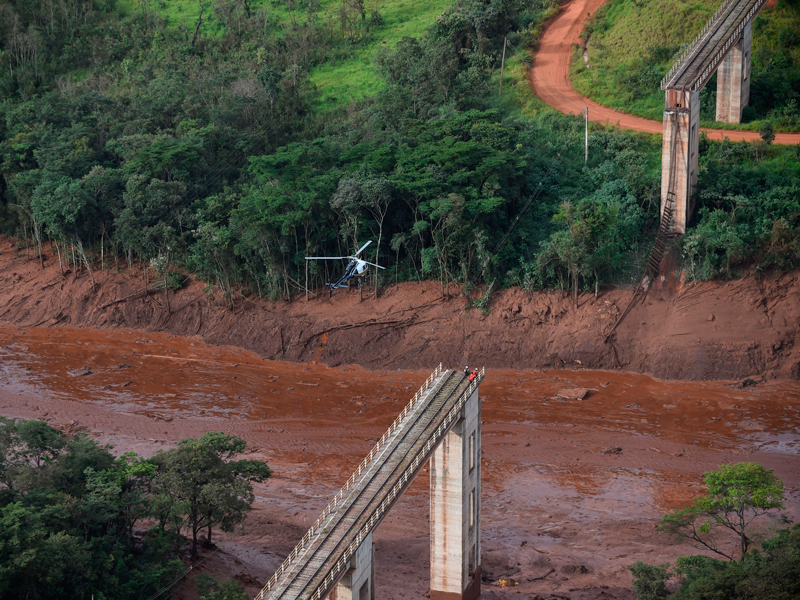 Before 2019, few had heard of Brumadinho, a small municipality of Brazil. Located in the state of Minas Gerais (which means ‘general mines’), the town is largely dependent on mining for its livelihood. On January 25, tragedy put Brumadinho on the map.

The local mining dam suddenly collapsed and a mudslide engulfed the area, bursting through the mine’s offices before descending on the community below. The most recent figures from the Civil Police of Minas Gerais, released on May 5, put the death toll at 237, with 33 people still missing, making it the deadliest incident in the history of Brazil’s mining industry.

The owner of the complex, the mining company Vale, now faces public condemnation. Since the incident, 11 employees and two contractors have been arrested. This is not the first time Vale has been implicated in a dam collapse. A similar accident occurred in 2015, when a dam owned by Vale and BHP burst in Mariana (also located in Minas Gerais), killing 19 people and flooding the local area.

In both instances, the dams were tailings dams, which store the waste produced during the mining process. There is one particular type of tailings dam – the upstream dam – that has been known for more than 10 years to have a higher risk of collapse than any other. Upstream dams use the mine waste itself to form part of its structure, which can make it less stable over time. There are 88 dams of this kind in Brazil. Both the Brumadinho dam and the Mariana dam were upstream dams.

Erica Schoenberger, Professor of Environmental Health and Engineering at Johns Hopkins University, told The New Economy: “Upstream dams, where the sequential stages of the dam are built inwards, are cheap but not so good at retaining water and are particularly susceptible to seismic shocks.”

In spite of these safety concerns, dams built using the upstream method constitute the vast majority of tailings dams. There are approximately 3,500 tailings dams worldwide and they are among the largest man-made structures on Earth. Yet few people are aware of them. As containers for a toxic sludge of water and minerals, tailings dams exist to keep mining waste out of sight and out mind. The invisibility of these dams within public consciousness reflects their place in the mining industry, which has tended to treat waste management as an afterthought and is now suffering the consequences.

Behind the Vale
Vale is the world’s largest iron ore exporter. Given the significant role that natural resources play in the Brazilian economy, the organisation has enjoyed huge success over the years. This can be attributed in part to the commodities boom of the mid-2000s, which was spurred on by high resource demand from China. As a major job provider in Brazil, the mining industry has also tended to enjoy support from politicians. For instance, President Jair Bolsonaro campaigned on promises to increase mining in the Amazon rainforest. The sector has been incentivised to maximise production, seemingly at the expense of safety regulations.

Across many industries, the traditional approach to waste is to deal with it as cheaply as possible. For example, water dams are functionally very similar structures to tailings dams but their security is taken more seriously at the early stages of design since water is a valuable asset; there is profit to be made from storing water effectively.

Over the last decade, tailings dam collapses have become more common, and researchers at World Mine Tailings Failures predict that 19 very serious failures will occur between 2018 and 2027. As a result, investors are now realising the extent of the risk across the mining industry. In April 2019, the Church of England Pensions Board and Council on Ethics of the Swedish National Pension Funds called upon almost 700 listed mining companies to disclose information about their management of tailings dam facilities. They posited that investors have a right to better assess the risk of their holdings in mining companies.

Vale maintains that it has always abided by global regulatory standards, a claim that is being assessed by the ongoing criminal investigation. However, if true, it would suggest that the current global standards do not do enough to reduce the risk of collapses.

Searching for alternatives
On the one hand, the cause of the recent dam collapses stems from poor design and engineering. Tailings dams are outdated structures that have seen little innovation since they were created approximately 100 years ago. The Ecologist argues that this lack of innovation can be attributed to cutbacks to research and development departments in the downturn of the mining supercycle. Now many are calling for the use of alternatives to tailings dams.

One such alternative is the dry stack method. This involves dewatering the mine waste and compacting it for storage. This not only means that less water is used in the mining process but also makes the structure much more stable. However, it is not currently considered to be financially viable for larger mines and only works in certain environments. Its use was rejected for a new mine in British Columbia because it is less feasible in wet, mountainous regions.

A particularly attractive prospect looks to minimise the amount of waste produced by mining or even eliminate it altogether. Dr Bernhard Dold, Professor of Applied Geochemistry at Luleå University of Technology, believes such techniques could prove instrumental in making the mining industry more sustainable. “We are at the starting point of this transition of the mining process,” said Dold. “The final goal is to eliminate the waste (tailings and waste rocks) and hence the risk of dam failures and pollution.”

According to Dold, one approach is to separate the more dangerous, reactive materials in the tailings from non-reactive silicates like sand, which could be repurposed for construction and other industrial processes. An even more exciting prospect, however, would be to find a way of turning tailings into a georesource. If this became commonplace within the industry, then the mining sector would naturally invest in the safety of tailings dams, as these would now store an asset as opposed to a waste product.

Taking responsibility
It is unlikely that the right engineering solution will present itself immediately. It may be that what the industry requires first is a fundamental shift in mindset.

“The planning and design of tailings storage facilities (TSFs) need to be integrated into the overall plan for the mine,” said Schoenberger. “This may seem a no-brainer, but it has not been standard practice in the industry. Expertise in TSF engineering needs to be nourished within the firm so that expert advice is consistently part of the process. Given that tailings dam failures are the largest cause of mining disasters, mine management needs to fully embrace the idea that TSF design and construction must attain the highest standards regardless of the cost, if for no other reason than that a TSF failure will cost the company more.”

According to Schoenberger, the tailings dam failures are more the result of insufficient regulations and poor governance than they are a question of technology. In support of this argument, The Wall Street Journal reported that Brumandinho miners had warned managers that the dam was going to collapse and still nothing was done. Schoenberger argues for greater responsibility at the decision-making level, both within companies and also from governments.

“Government regulation of the industry – and robust enforcement of those regulations – is an absolute necessity if we want to reduce the number and severity of mining disasters,” said Schoenberger. “Regulations on paper must be translated into practices on the ground. This means also that governments have to embrace the same principles of best practice and commit to enforcing them.”

Historically, the economics of disaster risk has not been factored into the overall cost of building a mine. The Brumandinho disaster shows just how detrimental this shortcoming can be, both to mining companies and, more importantly, the communities they operate in. As shareholders become more aware of the risks posed by tailings dams and as governments place pressure on the industry to act, mining companies may be forced to find new, safer ways of managing their waste.