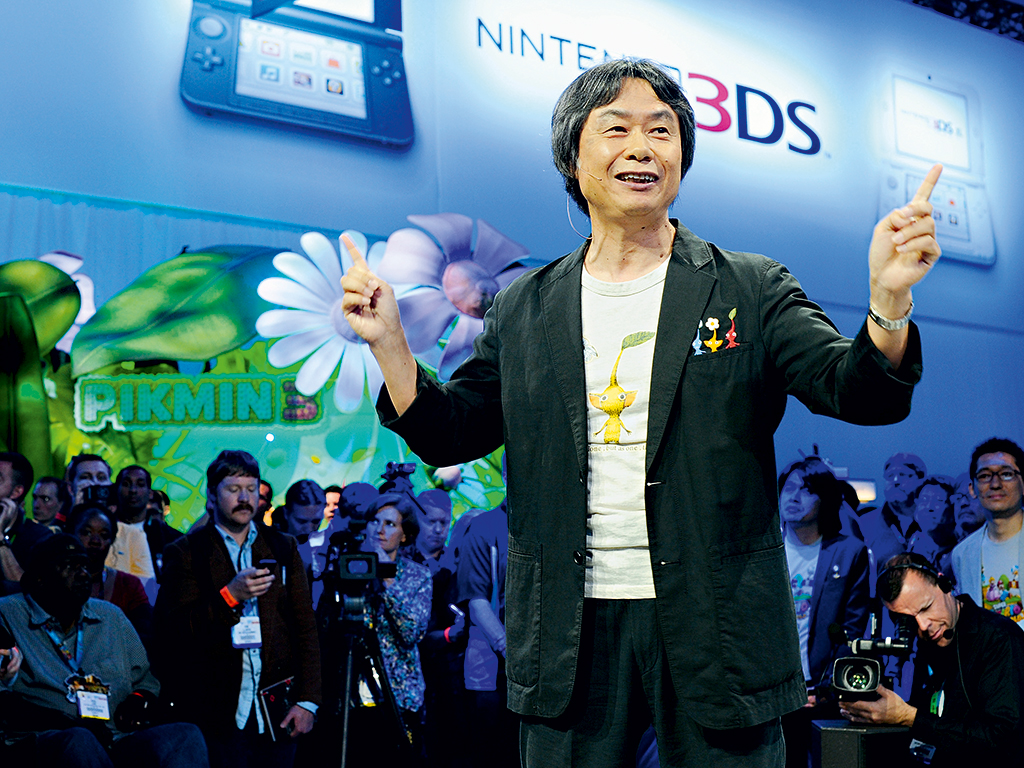 Shigeru Miyamoto, the designer and producer behind some of Nintendo’s biggest characters

In 1889, Nintendo – then Marufuku Co – began life as a simple playing card company. In the almost-eight decades that followed, it tried its hand at any number of businesses before finally sticking with video games. A staple of 80s and 90s childhoods and once a mainstay of the gaming community, Nintendo is today known less for innovative advances and cutesy characters, and more for a string of failed launches and below par financial results. Where once the Kyoto-based electronics company and immovable industry force topped the pile and showed no signs of budging for either love or money, stiff competition and wholesale changes to the market have since pulled the rug from underneath it.

After an especially joyless holiday season, Nintendo slashed its full-year earnings forecast in January, warning that, without a significant sales uptick, it could soon fall into sub-zero territory. Whereas Nintendo’s initial full-year profit forecast was JPY55bn ($453m) ending in March, less-than-impressive sales mean that dropped to a JPY25bn ($206m) loss, and heaped pressure on company executives. With a record-breaking 2007 still fresh in the memory (the result of the then-revolutionary Wii console), it’s scarcely believable the company could since have lost 80 percent from its $85bn market cap.

A difficult history
Nintendo is home to some of the video game industry’s most iconic characters: Mario, Donkey Kong and Kirby among them. Even today, the company’s trademark names are some of the best loved in the business. Head out to any gaming convention and chances are you’ll see dozens – if not hundreds – of attendees dressed as Pikachu, Samus Aran, Luigi and the like, all parading the conference floor to the tune of countless high fives and photo requests. Still, this affection has failed to turn much in the way of profit for a company that has now been on the slide for almost 20 years.

The Nintendo 64, released in 1996, was far from a flop but was outperformed by Sony’s PlayStation, and things got worse with the release of the GameCube in 2001: Sony’s PlayStation 2 and Microsoft’s Xbox both outsold Nintendo’s ‘purple lunchbox’. True, the release of the Wii granted the console maker a much-needed respite, but the company is once again struggling for relevance in today’s gaming market.

Nintendo’s latest third-quarter results show total sales of its latest console, the Wii U, are less than half of Sony’s PlayStation 4, despite a year’s head start. Where once Nintendo console shipments tipped the 26 million per year mark, they have fallen to a paltry 7.5 million in the space of only four years. Holiday sales have saved the company from out-and-out embarrassment, but the company’s showing in the latest console cycle makes for painful reading.

Casual success
Looking only at overall sales, Nintendo appears to be fast-approaching crisis point. But a second glance at the numbers shows there are still corners of the market in which the company outshines its rivals. For example, stellar Wii sales serve, if nothing else, to underline the company’s ability to sell video gaming to families and younger consumers – those falling under the ‘casual gamer’ bracket. It is here above all other areas that Nintendo has made a name for itself.

The company’s roster of characters is somewhat atypical for an industry best characterised by gun-wielding beefcakes and big-breasted damsels, and the colourful and cartoonish nature of its signature names lends itself well to younger consumers. Add to that the parlour-game-like nature of the Wii, and it is unsurprising the company should hold such a high standing in the families and young consumers category.

Even despite the recent hard times, Nintendo’s reputation in the casual gaming market is without rival. Speaking to TrustedReviews, the head of PlayStation UK, Fergel Gara, admitted the decline of Nintendo “could be detrimental to the market, unless people like us raise our game and help tap into the younger consumer group that they serve rather well”.

Still, this focus on the casual market is not enough to keep Nintendo from falling behind. It must address underlying structural changes to the industry, if only to remain within touching distance of the competition. Having dedicated considerable resources to expanding the gaming population by turning consumers on to casual titles, the mobile gaming revolution means this is less important than it was eight years ago. Consumers need no longer purchase dedicated consoles; the smartphone revolution means casual titles are more immediate and cheaper on a phone than they are on, for example, the Wii.

“Fortunately, because of the spread of smart devices, people take games for granted now”, said Shigeru Miyamoto, the world-renowned video game developer behind some of Nintendo’s biggest releases, in an interview with Edge magazine. “It’s a good thing for us, because we do not have to worry about making games something that are relevant to general people’s daily lives.”

True, the success of the Wii suggests Nintendo was right to target casual gamers and put its financial might behind motion capture technology, but the model has dated fast, and Nintendo must rethink its strategy or risk falling by the wayside.

Strategy switch-up
Some commentators eyeing Nintendo’s less-than-impressive bottom line have suggested the company abandon its hardware business, and many more are of the opinion the best course of action would be to bring the cycle of the Wii’s disappointing successor, the Wii U, to an end before any more damage is done.

Some suggest licensing what remain of the company’s most valuable assets – its IPs – could lend Nintendo a much-needed pick-me-up. Talk on this point has mostly centred on lending some of its best-loved characters to mobile platforms, and the company’s partnership with mobile portal DeNA points to a near future in which Mario and the gang will feature prominently in dedicated smartphone and tablet titles. However, doing so could well cheapen the brands and potentially pile further pressure on the company’s bottom line in the long term.

In choosing to lay out a long-term strategy at the beginning of last year, Nintendo started work on the task of turning its fortunes around. In a meeting with investors, Nintendo President Satoru Iwata acknowledged some of the company’s recent failings and outlined how the company could improve on its current situation. “I am here to tell you about our future, and to begin with, I would like to mention what Nintendo will not change”, he said. “Since the revision to our full-year financial forecast, there have been various reports and comments about us. However, we do not hold a pessimistic view of the future of dedicated video game platforms.”

By taking advantage of the Wii U GamePad (the console’s controller, which incorporates elements of tablet devices) and releasing a number of much-anticipated blockbuster titles, Nintendo can more easily meet its short-term targets. However, the company’s medium- to long-term prospects are far more complicated, and ask that Nintendo effectively redefines its video game platform, takes advantage of smart devices, expands its character licensing business and changes its approach to new markets, according to Iwata. Most important of all is Nintendo’s decision to expand into new lines of business.

A new ‘Blue Ocean’
“I have run Nintendo with the belief that the raison d’etre of entertainment is to put smiles on people’s faces around the world through products and services”, said Iwata. “This time, we decided to redefine our notion of entertainment as something that improves people’s quality of life in enjoyable ways, and take a step forward in expanding our business areas.” Nintendo’s revised remit is to improve people’s quality of life in enjoyable ways by stepping away from dedicated video game platforms and focusing first and foremost on health.

Nintendo’s well-received Wii Fit titles, which allow users to partake in their own personalised fitness programme, was a resounding success, and brought with them countless stories of how once-overweight individuals had gotten into shape by way of various in-game mechanics. Capitalising on a budding health and fitness industry, and willingness among consumers to trial new ways of keeping fit, Nintendo overturned common misconceptions about the gaming industry as one intended only for coach potatoes and slobs. It’s a market analysts expect will continue to thrive, at least for the immediate future.

For proof consumers are focusing more on health and fitness, doubters need look only at the mobile app industry, where the market in 2014 played host to an explosion of heath- and fitness-based titles. Flurry Analytics data showed that, in only the first six months of 2014, 62 percent of average daily app usage growth was attributable to wellness and fitness.

As it stands, the explosion in the health and fitness sector is primarily down to so-called fitness fanatics – those who spend three times more on fitness apps than the general population – though Nintendo is hoping to convince casual users to indulge a little more in the fun. In choosing to take its business into a “new Blue Ocean”, as Iwata calls it (meaning consoles, mobiles, wearables and non-wearables), the company can more easily engage health-conscious consumers and soon-to-be fitness fanatics. By expanding the ‘fit population’, as it did so successfully with the gaming population, Nintendo hopes to redefine health consciousness and leverage its strengths as a successful entertainment company.

True, the company could do with an immediate pick-me-up, if only to restore consumer confidence, but an objective look at the company’s achievements shows few others – if any – are as well qualified to capitalise on the market as Nintendo. Assuming the company can repeat its past success and woo consumers with its revamped focus on health and wellbeing, we could be about to see the beginning of a Nintendo revival.