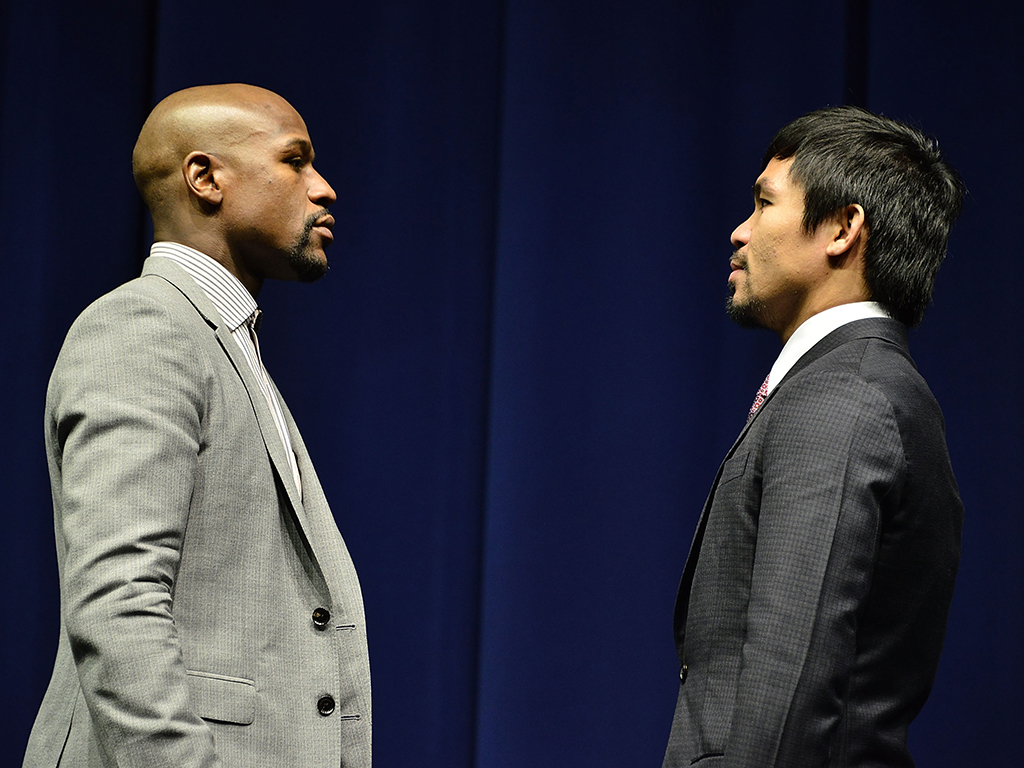 Mayweather (left) and Macquiao (right) attend a press conference ahead of their fight. Ticket sales are expected to generate $74m

It’s the stand-off that fans have been waiting for; some said it would never happen, although all hoped for the day that the announcement was made. The world’s best boxers, pound-for-pound, will finally come head-to-head on May 2 in Las Vegas, home of the biggest fight-nights in history.

Ticket sales, which range from $1,000 to $10,000, are expected to generate $74m, more than the $60m made from this year’s Super Bowl – despite at a capacity of 16,000, the MGM Grand has four times fewer seats than the host of Super Bowl XLIX, the University of Phoenix Stadium. Soon after going on sale, tickets have become increasingly difficult to purchase, particularly as few are available to the general public.

In total, the match is estimated to earn $500m

That’s just the ticket sales. According to BBC Sport, HBO and Showtime will be charging a record $99.95 to watch the bout. While on the other side of the Atlantic, following a fierce scramble with other networks, Sky Sports Box Office has been awarded the exclusive live rights to broadcast the greatly-anticipated fight in the UK. British pay-per-view customers will give £24.95, £10 more than the price charged to watch the Mayweather vs. Ricky Hatton fight in 2007. It is predicted that the total profit earned from pay-per-view will amount to $250m, obliterating the previous record of $150m, which was set by Mayweather’s fight with Canelo Alvarez in 2013.

“I’ve never been around a fight that everyone is talking about like this one, people are counting down the days. Mayweather v Pacquiao is up there with Muhammad Ali v George Foreman as a worldwide event – and it’s the biggest Sky Sports fight ever,” boxing expert and columnist, Glenn McCrory, told Sky Sports News. The plethora of channels and digital outlets belonging to Sky Sports will cover the build-up to the fight, including press conferences and the training camps of both fighters.

In total, the match is estimated to earn $500m, making it the most lucrative fight of all time. With all of the hype, anticipation and steep prices required to witness Mayweather vs. Pacquiao fans hope that it will be a knock-out fight, rather than a knock-out within the early rounds.