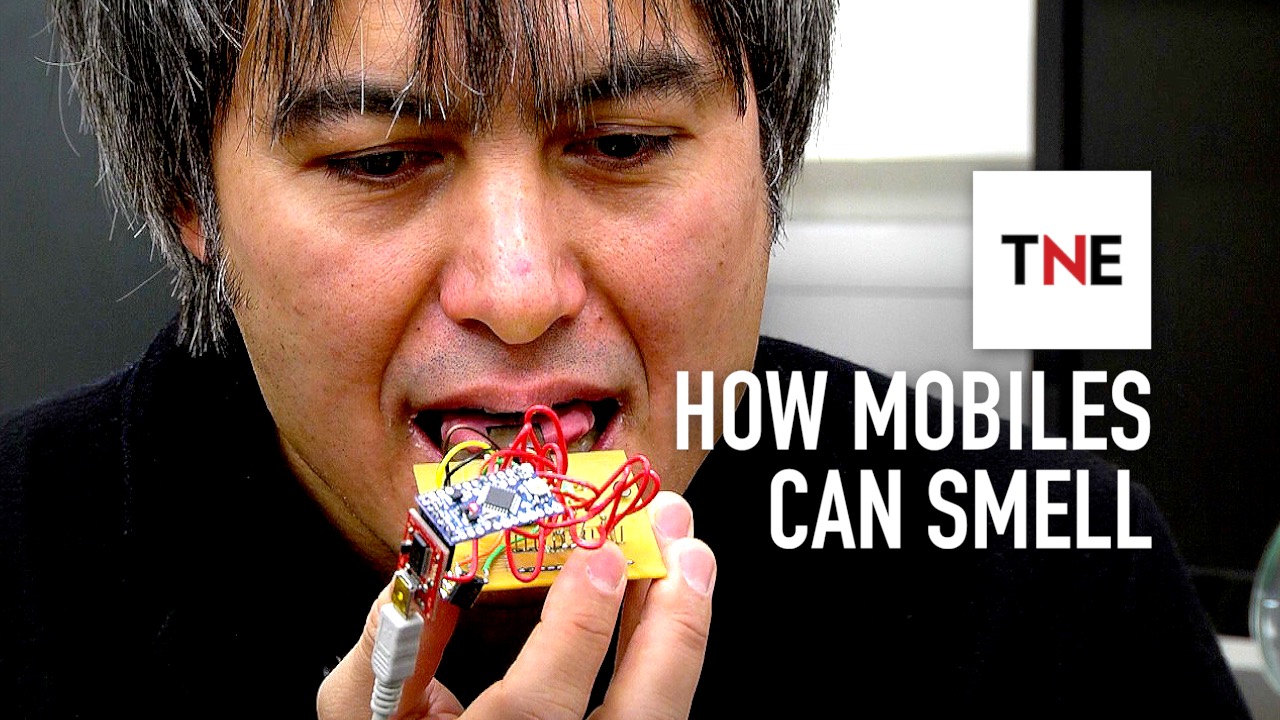 Scientists are coming increasingly closer to developing technology that will allow us to use all our senses on the internet. Professor Adrian Cheok, City University London, explains how mobile phones will soon allow people to taste and smell, what the commercial benefits of this technology might be, and just how much it’s going to cost

The online world: it’s all about the visual and sound experience, but with three other senses, it can leave us short. Studies have demonstrated that more than half of human communication is non-verbal, so scientists are working on ways to communicate taste, touch, and smell over the internet. I’ve come to the City University London to meet Professor Adrian Cheok, who’s at the forefront of augmented reality, with new technology that will allow you to taste and smell through a mobile phone.

The New Economy: Adrian, this sounds completely unbelievable. Have you really found a way to transmit taste and smells via a mobile device?

Adrian Cheok: Yes, in our laboratory research we’ve been making devices which can connect electrical and digital signals to your tongue, as well as your nose. So for example, for taste we’ve created a device which you put on your tongue, and it has electrodes. What those do is artificially excite your taste receptors. So certain electrical signals will excite the receptors, and that will produce artificial taste sensations in your brain. So you will be able to experience, for example, salty, sweet, sour, bitter – the basic tastes on your tongue – without any chemicals.

[I]t’s a device that you can attach to your mobile phone, and these devices will emit chemicals

And with smell we’re going in a couple of tracks. One is using chemicals, it’s a device that you can attach to your mobile phone, and these devices will emit chemicals. So that means that with apps and software on your phone, you can send someone a smell message. For example, you might get a message on Facebook, and it can send the smell of a flower. Or if your friend’s not in a very good mood it might be a bitter smell.

So the next stage of that is, we’re making devices which will have electrical and magnetic signals being transmitted to your olfactory bulb, which is behind your nose. It’ll be a device which you put in the back of your mouth, it will have magnetic coils, and similar to the electrical taste actuation, it will excite the olfactory bulb using electrical currents. And then this will produce an artificial smell sensation in your brain.

Already scientists have been able to connect optical fibre to neurons of mice, and that means that we can connect electrical signals to neurons.

With the rate of change, for example with Moore’s Law, you get exponential increase in technology. I think within our lifetimes we’re going to see direct brain interface. So in fact what you will get is essentially, you can connect all these signals directly to your brain, and then you will be able to experience a virtual reality without any of these external devices. But essentially connecting to the neural sensors of your brain. And of course that also connects to the internet. So essentially what we will have is direct internet connection to our brain. And I think that will be something we will see in our lifetime.

The New Economy: So direct brain interface – that sounds kind of dangerous. I mean, could there be any side-effects?

Adrian Cheok: Well we’re still at the very early stages now. So scientists could connect, for example, one optical fibre to the neuron of a mouse. And so what it has shown is that we can actually connect the biological world of brains to the digital world, which is computers.

Of course, this is still at an extremely early stage now. You know, the bio-engineers can connect one single neuron, so, we’re not anywhere near that level where we can actually connect to humans. You would have to deal with a lot of ethical and also privacy, social issues, risk issues.

Now if you have a virus on your computer, the worst it can do is cause your computer to crash. But you know, you could imagine a worst case: someone could reprogram your brain. So we’d have to think very carefully.

The New Economy: Well why is it important to offer smell over the internet?

Now that we’re in the internet age, where more and more of our communication is through the internet, through the digital world, that we must bring those different senses – touch, taste and smell – to the internet; so that we can have a much more emotional sense of presence.

The New Economy: What will this be used for?

Adrian Cheok: Like all media, people want to recreate the real world. When cinema came out, people were filming, you know, scenes of city streets. To be able to capture that on film was quite amazing. But as the media developed, then it became a new kind of expression. And I believe it will be the same for the taste and smell media. Now that it’s introduced, at first people will just want to recreate smell at a distance. So for example, you want to send someone the smell of flowers, so Valentine’s Day for example, maybe you can’t meet your lover or your friend, but you can send the virtual roses, and the virtual smell of the roses to his or her mobile phone.

At the next stage it will lead to, I think, new kinds of creation. For example, music before; if you wanted to play music, you needed to play with an instrument, like a violin or a guitar. But now the young people can compose music completely digitally. Even there’s applications on your mobile phone, you can compose music with your finger, and it’s really professional. Similarly, that will be for smell and taste. We’ll go beyond just recreating the real world to making new kinds of creation.

The New Economy: So will it also have a commercial use?

Adrian Cheok: For advertising, because smell is a way to trigger emotions and memory subconsciously. Now, you can shut your eyes, and you can block your ears, but it’s very rare that you ever block your nose, because you can’t breathe properly! So people don’t block their nose, and that means advertising can always be channelled to your nose. And also we can directly trigger memory or an emotion. That’s very powerful.

[Y]ou want to send someone the smell of flowers, so Valentine’s Day for example, maybe you can’t meet your lover or your friend, but you can send the virtual roses

We received interest from one of the major food manufacturers, and we’re having a meeting again soon. They make frozen food, and the difficulty to sell frozen food is, you can’t smell it. You just see these boxes in the freezer, but because it’s frozen, there’s no smell. But they want to have our devices so that when you pick up the frozen food maybe it’s like a lasagne, well you can have a really nice smell of what it would be.

The New Economy: How expensive will this be?

Adrian Cheok: We’re aiming to make devices which are going to be cheap. Because I think only by being very cheap can you make mass-market devices. So our current device, actually to manufacturer it, it’s only a few dollars.

The New Economy: Adrian, thank you.

Adrian Cheok: Thank you very much.