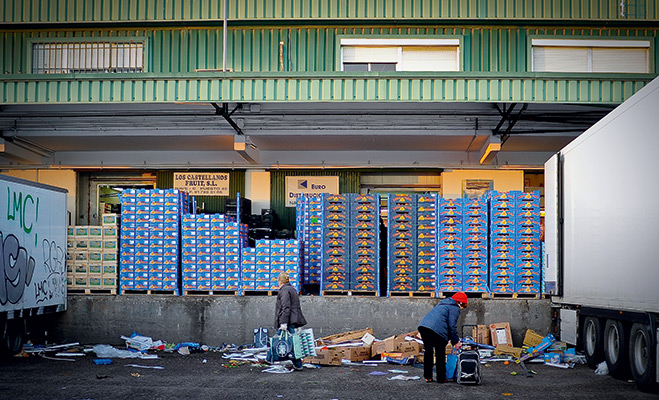 Almost half of the planet’s population does not enjoy a healthy diet. One billion people suffer from hunger, one more billion people are undernourished and another billion people overeat. Food supply, however, is not the only problem. There is more than enough grown to feed all seven billion of the world’s inhabitants. Per capita food production continues to increase, bringing with it a new problem: waste.

The best scientific analysis done to date estimates that over one-third of the world’s food is either lost during its journey across the supply chain or is tossed away by the consumer. Over 70 percent of all water is used on farms, which means that roughly one fourth of all the water that humans take from the planet goes into food that nobody eats. The Food and Agriculture Organisation of the UN (FAO) projects that demand for food, feed and fibre will grow by another 70 percent by 2050. Water and land resources needed to grow food are also under increasing pressure from all sectors of the global economy, and particularly for energy production, which is also projected to stand 84 percent higher than it does today.

It is not just water and money that are being wasting away either. Food production requires significant amounts of energy, and can also be a major source of greenhouse emissions and pollution when it is not properly disposed of. Efficient water use – in agriculture and industry in particular – and dramatic reductions in the losses and waste of food, are among the most effective ways to provide for a growing global population while reducing pressure on the environment. Investments by governments, financial institutions and companies in resource efficiency can save money today and help ensure that the planet’s limited resources are preserved for the future.

Fixing the leaks
Losses accumulate during the harvesting, threshing, transportation, distribution, processing and storage of food before it reaches the consumer. The packaging and marketing of food products can all also contribute to more or less food going to waste. Investments in improved harvesting, storage, transport and cooling infrastructure can reduce losses significantly. Coupled with increased access of local producers to better food processing, packaging and new markets, more food will be sold and less lost, providing economic and social benefits to both producer and consumer. Reducing losses in the supply chain has the potential to save production costs, and increase profitability for farmers and companies.

Investment in more productive agricultures, especially in developing countries, will also pay off in a big way. There are a variety of techniques, technologies and investments that can enable farmers to grow more ‘crop per drop’ of water, with the potential for improvements vast.

With widespread action to improve the efficient and fair use of available water resources, it is possible to sustainably double agricultural production in the coming decades and provide enough food for a growing global population. Food production can be rapidly increased using renewable water through support to rain-fed smallholder agriculture. The Consultative Group on International Agricultural Research (CGIAR) estimates that investment in international agricultural research in developing countries can deliver as much as nine dollars worth of additional food produced for every dollar invested by finding, for example, drought-tolerant crop varieties and hardier livestock breeds that are more resilient to climactic variability.

Curbing waste
In more advanced economies, less is lost in the field but more is discarded into the bin. In the US, 40 percent of purchased food is thrown away either in the market or by the consumer.  That waste is worth up to $100bn and has more than enough calories to meet the needs of all of the world’s hungriest. Europe is not much different. Today, the average European throws away nearly 180kg of food each year and with the exception of the US, Canada and Australia, the nations with the highest rates of food waste per capita are located in Europe.

One of the major barriers to preventing food waste is that the responsibility for the problem is muddled. It is a consumer’s right to eat or not eat food, and ultimately it is the individual’s responsibility and choice to take action to reduce the amount of food that they throw away.

However, there is a role for governments, food producers and sellers to engage consumers and provide incentives, guidance to reduce the waste and unhealthy overconsumption of food.

Numerous cooperative initiatives led by governments, private sector companies and NGOs are being led to help individuals improve energy efficiency in their homes, and campaigns to increase recycling have had success in several countries. Reducing food waste is a similar win-win issue that should be added to the priority list of local and national governments and relevant private sector companies. There are positive signs that this is starting to happen in the EU, which should expand opportunities for solution providers that make it simpler and more convenient for people and businesses to reduce their waste.

Facilitating change
The action by the EU Parliament in 2012, which called on the European Commission to adopt a goal of halving food waste by 2025 is precisely the type of initiative that is needed, not only here in Europe but also globally. The European Commission estimated in a recent report that if no action is taken, total food waste will continue to increase by an additional 40 percent across the continent. The resolution specifically pushes for many waste-reducing measures, like less confusing date labelling on food packaging, a wider range of package sizes with perishables, and country-specific food-waste-prevention targets, and even declares that 2014 will be the “European Year Against Waste”.

There is still a long way to go to ensure that actions are taken to actually achieve these goals, but this is a crucial first step. Leaders in government, business and finance around the world should follow suit and work harder to cultivate opportunities to reduce losses across the entire supply chain. Time, like water and food resources, is too valuable to waste.