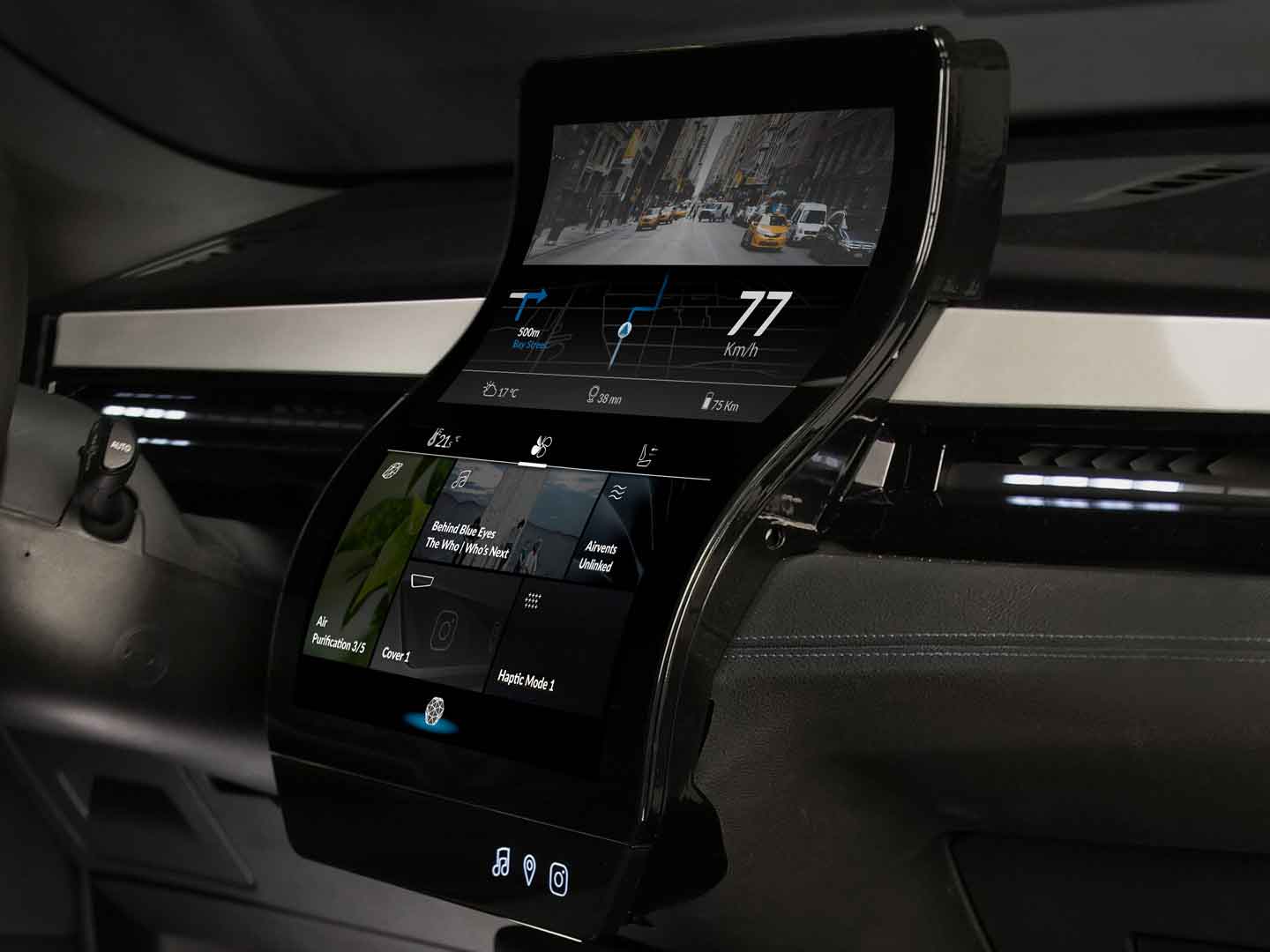 The FlexView Max, as seen in the Nova Car 2, is a prime example of how flexible display technology will impact the way consumers receive information. Image ©️ Novares

We often find ourselves talking about all the ways technology is improving, from smarter chipboards under the hoods of our favourite products to the machine learning underpinning the software inside them. Less-often discussed are the large strides that have been taken when it comes to display technology – an area that has recently seen its own significant advances in what can be achieved.

Conventional glass-based displays are flat, rectangular and breakable, limiting design freedom. Therefore, over the past few years, a lot of effort has gone into developing flexible displays that can transform product design and bring about new use cases.

A flexible approach
Flexible organic light-emitting diode (OLED) displays have been around for several years, and have already been adopted in some smaller-screen consumer products, such as the Apple Watch and Samsung Edge. However, due to their high manufacturing costs and shorter lifetime, the use of flexible OLED displays hasn’t spread to mainstream devices with large screens.

OLCD is three to four times cheaper than today’s flexible OLED displays, and is well suited to applications where conformable displays with a larger area and longer lifetimes are required

A newer technology, known as organic liquid crystal display (OLCD), is addressing several limitations of conventional glass displays by replacing the amorphous silicon transistors on glass with high-performance organic transistors made on ultra-thin plastic substrates. Because of its simpler manufacturing process and compatibility with existing LCD manufacturing equipment, OLCD is three to four times cheaper than today’s flexible OLED displays, and is well suited to applications where conformable displays with a larger area and longer lifetimes are required.

From automotive applications to smart devices and digital signage, this new generation of flexible OLCD screens is going to impact millions of consumers. So, what does this look like in reality?

The automotive interior of the future
Consumers are always looking for the next advancement in the goods they consume, but the automotive industry is one that comes with particularly high expectations, largely thanks to years of Hollywood blockbusters. Many of us find our imaginations going that little bit further when we are asked to envision the car of the future. Just look at the latest launch by Tesla – accompanied by cyberpunk aesthetics and a synth soundtrack, the entire event was a love letter to today’s elevated consumer expectations.

But the cars of the future are quickly becoming a reality, with autonomous functionality and fully kitted entertainment systems already far more advanced those of only a decade ago. One area that is seeing particularly rapid innovation is the display systems within vehicles. These have evolved significantly over the past few years: in 2017, IHS Markit forecasted automotive display system markets would grow to a value of nearly $21bn by 2022. The next big change will be the mass take-up of flexible displays within vehicles, which will allow for everything from the side-view mirrors to the centre console to be replaced.

One of the frustrations with existing side-view mirrors is that they impact the aerodynamic performance of the vehicle, have to be customised for each driver and are held back by natural blind spots. By replacing them with a flexible OLCD on the inside of the vehicle, such as the one Novares utilised in the Nova Car 2, they can be powered by a camera on the outside which will allow for greater visibility. Car manufacturers can also include smarter analytics within the software, increasing safety for the driver.

Flexible displays would also allow sunroofs to become one screen, with the potential to limit or increase the light being allowed in. Furthermore, flexible displays can wrap around the dashboard or centre console of a car, making it easier to read information or manipulate it with physical touch. As vehicles become more autonomous, the potential to make entertainment systems more immersive also becomes a possibility.

The reinvention of the household
OLCD technology will not only impact consumers on four wheels – it will also have an impact on those living within four walls. Although it’s taken longer than some expected, homes are gradually becoming smarter and more immersive in terms of how consumers can engage with them. The biggest trend that has defined the past few years has been the rise of voice-activated controls. However, we will soon start to see an increasing number of conventional displays turned on their head.

It will be possible for flexible displays to be wrapped around everything from the fridge to the oven, allowing information to be displayed across the whole device

It will be possible for flexible displays to be wrapped around everything from the fridge to the oven, allowing information to be displayed across the whole device. The cost of this technology will be far less than that of existing solutions, meaning increasing numbers of conventional household white goods will become more immersive and technically impressive.

Furthermore, this level of immersion will also start to impact the retail and advertising spaces. We are already seeing more demand for engaging forms of advertising within real-world settings; with the current shift towards online engagement, brands are desperate to improve the physical experience for consumers. This means we will soon see a greater fusion between the physical and digital, particularly with interactive displays that can be adapted and engaged with depending on the target audience.

In particular, point-of-sale marketing can enhance the customer experience by communicating information on the product through interactive displays and touch screens – this, in turn, can increase product sales. In the transportation sector, meanwhile, hubs, links and vehicle exteriors provide the opportunity for advertising, or the presentation of up-to-date information on schedules and delays.

What needs to happen next?
Brands are already looking to the future of displays, but the take-up will only increase as the cost of production continues to go down. Flexible displays are going to become a major consumer expectation, meaning that once they are used in a few applications, demand will increase, and brands will have to work hard to keep up. At FlexEnable, we expect to see wrappable displays and curved screens in our homes, cars and public spaces within the next few years.