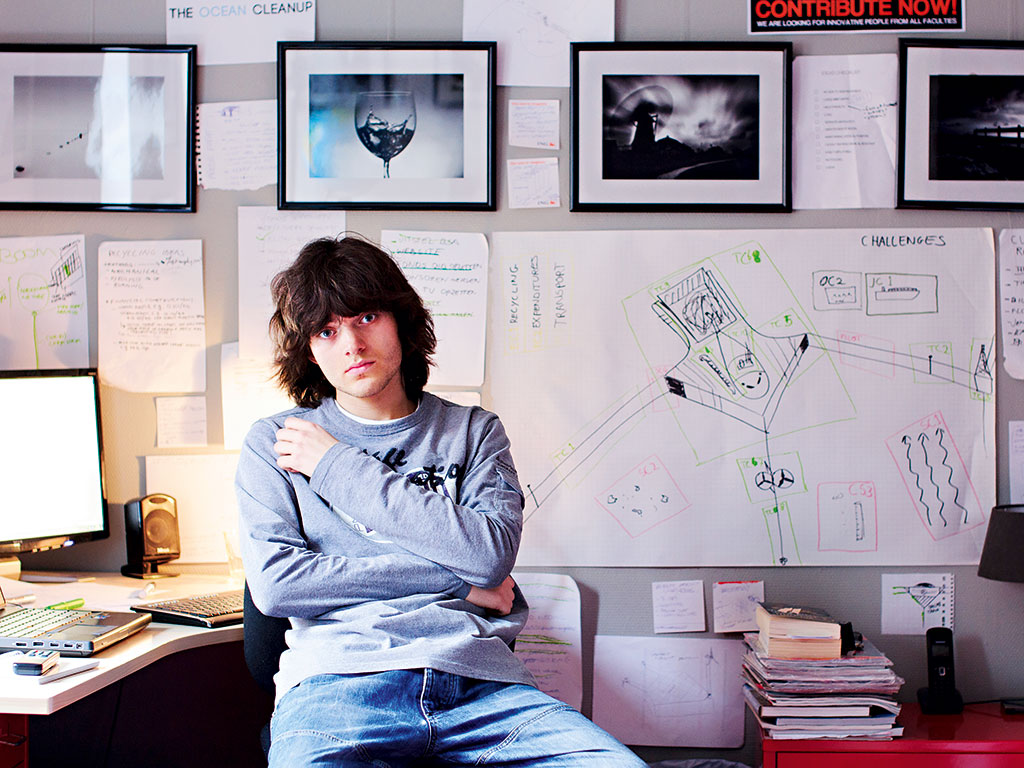 Boyan Slat, founder and CEO of the Ocean Cleanup project. The Dutch inventor came up with the idea for the initiative after becoming frustrated with seeing "more plastic bags than fish" while holidaying off the coast of Greece

It has almost become fashionable to condemn the youth of today as a generation of lazy, work-shy reprobates. And no wonder people have grown so comfortable labelling millennials with such conviction when even the UK Prime Minister, David Cameron, has been accused by union leaders of “lazily stereotyping” youngsters and blaming them for migrant workers taking their jobs.

But Cameron and other critics, who choose to believe laziness has descended on the youth of today like a virus, might have to reconsider their position, as one millennial may have just found the solution to a problem that threatens mankind’s very existence on this planet: oceanic plastic pollution.

The young man in question goes by the name of Boyan Slat. He is the founder and CEO of the Ocean Cleanup project, which is responsible for the creation and development of a revolutionary technology that aims to do something about the eight million tons of plastic that enter the world’s oceans each and every year.

Tons of plastic produced each year

According to his blog, Slat first came up with the idea while diving off the coast of Greece and becoming increasingly frustrated by the fact that he ended up seeing “more plastic bags than fish”. The frustration he felt was quickly converted into something more positive, providing the drive to start asking the obvious questions, such as: “Why can’t we clean this up?”

Questions soon found answers and Slat’s inquisitive nature led to what he dubbed the “passive cleanup concept”, which he first presented to a packed crowd at a TEDx Talk in October 2012, at the tender age of 18. “Once there was a Stone Age, a Bronze Age and now we are in the middle of the Plastic Age”, the young Dutch inventor told his audience. “Because every year we produce about 300 million tons of plastic and a fraction of that enters rivers and waterways and eventually the oceans.

“Due to sun and waves over the years, the [plastic] garbage breaks down into ever smaller pieces, but remains plastic. The [plastic] debris primarily collects at… five rotating currents called the gyres, where it doesn’t only directly kill sea life, but, due to the absorption of PCBs and DDTs, also poisons the food chain.”

Now in his 20s, the young inventor’s system doesn’t directly target the plastic. It instead uses the ocean’s natural currents to concentrate the plastic and then extract it. What’s more, his technique enables the cleanup operation to be carried out extremely efficiently, reducing the overall time from millennia to a couple of years.

Cleanup critics
But there are those who question just how effective Slat’s cleanup strategy really is. The San Francisco-based NGO Project Kaisei (a cleanup initiative set up by the Oceans Voyages Institute with the intention of raising awareness about the global problem of marine debris) estimates only 30 percent of all rubbish that is dumped into the world’s oceans remains on its surface. The remaining 70 percent simply sinks to the bottom – unreachable by the system of barriers Slat has created.

Other critics argue policymakers and conservationists would be better off attempting to implement prevention and interception strategies in a bid to stop the plastic from reaching the ocean in the first place.

“We have recently shown that it can take up to 50 years for plastic released from our shorelines to travel to the patches”, says Erik van Sebille, a physical oceanographer at UNSW Australia in a report for the website The Conversation. “That means that, even if we would clean up the garbage patches today, the garbage would return within a few decades, as the plastic that is currently spread across the ocean slowly accumulates again.

“If we stop polluting today, within a few decades there will be almost no more plastics in our oceans outside of the garbage patches. Only then, once we have stopped plastics entering our oceans in the first place, can we sensibly make the decision whether and how we want to spend the resources to clean the distant garbage patches.”

Then there is Tony Haymet, a professor at Scripps Institution of Oceanography at the University of California, who, in an interview with Al Jazeera America, explained that the micro plastics, which Slat claims to be able to remove and which are abundant in sites such as the Great Pacific Garbage Patch, are simply too small to be practically extracted from the water. “As far as I know – sadly – this remains true today”, Haymet said. “It’s a horribly tricky issue.”

Despite all the naysayers and critics of his cleanup plan, after an intensive feasibility study released in 2014, Slat and his team got the green light for their project and are preparing for its launch, which is set for some time next year. According to Slat’s blog, a research expedition aimed at collecting “more plastic measurements than have been collected in the past 40 years combined” is planned for August. The expedition will require a minimum of 50 vessels, and, in order to ensure the research trip gets as many boats as possible, the Ocean Cleanup’s website has requested volunteers in the hope skippers and ship owners will heed the call and sail with the team across the 3.5 million square kilometre area located between California and Hawaii.

Clear blue
Around 80 percent of all marine pollution comes from land-based activities; with the levels of plastic swirling in the world’s oceans becoming so vast they now outweigh all other types of marine debris, according to the Global Ocean Commission.

“If you want to eat a biscuit nowadays”, explained Slat during his TED Talk, “we have to buy a biscuit within a plastic wrapper, within a plastic tray, within a cardboard box, within some plastic foil, within a plastic bag.” With such a large proportion of the world’s animals, plants and microbes living under the sea, our reliance on plastic is threatening life as 50 to 80 percent of this planet’s inhabitants know it.

“Taking care of the world’s ocean garbage problem is one of the largest environmental challenges mankind faces today”, explained Slat in a statement. “Not only will this first cleanup array contribute to cleaner waters and coasts, but it simultaneously is an essential step towards our goal of cleaning up the Great Pacific Garbage Patch. This deployment will enable us to study the system’s efficiency and durability over time.”

The world will be hoping, despite what the critics say, that Slat and his team at the Ocean Cleanup will be able to deliver on their promise and rid the oceans of this harmful man-made component. Not just for the sake of those who rely on it to survive day-to-day, but for the future survival of life on this planet.