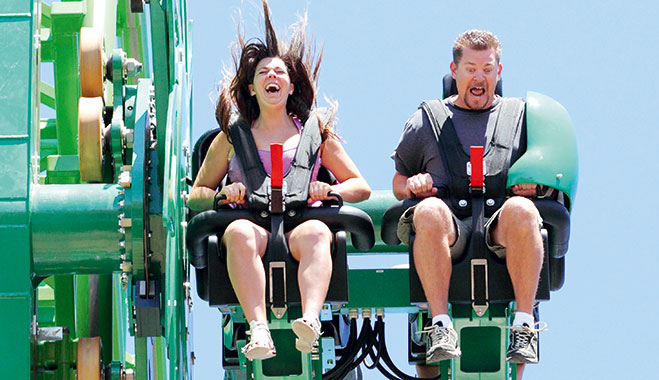 Tourists on a ride at a Californian theme park. Discounted theme park visits are one of the perks offered to Yahoo employees

At base level, the distinction between intrinsic and extrinsic motivation is simple. Intrinsic, or ‘psychic’, motivation refers to acting on the grounds of something being inherently interesting or otherwise exciting, whereas extrinsic, or ‘material’, motivation is when one is given rewards by an outside party.

The orientation of motivation can thus elicit very different responses in the workplace; responses are too often based upon cultural, social or indeed oppositional factors. The many studies into the effectiveness of either type of motivation – as well as the relationship between the two – have unerringly sought to unravel the interpretable and unique nature of this phenomenon.

Though the differences between and compatibility of alternate dynamics of motivation are often matters of psychological study, an understanding of motivation is now essential in ensuring the effective management of every organisation, from small companies to multinational corporations.

While many companies are yet to depart from the stagnant confines of office cubicles and greying towers, there are those who have dedicated valuable – though no less justified – resources to motivating employees. They are departing from an age-old corporate sensibility and instead focusing on personal freedom.

Intrinsic vs extrinsic
The motivational potency of pay is well-documented. In 1980, authors Locke, Feren,
McCaleb, Shaw and Denny said: “No other incentive or motivational technique comes even close to money with respect to its instrumental value.”

For most, financial reward is the predominant reason for working, in as much as it provides sustenance, security and privilege. The pecuniary aspects of work  (crudely) quantify the ‘worth’ of an individual and therefore provide an air of assurance between employer and employee.

Whereas the motivational by-product of pay is generally agreed upon, the notion of high pay leading to equal levels of satisfaction is debatable. Academic Alfred Kohn, a specialist in human behaviour, went so far as to say: “If a reward – money, awards, praise or winning a contest – comes to be seen as the reason one is engaging in an activity, that activity will be viewed as less enjoyable in its own right.”

How to foster resentment
Intrinsic motivation is often seen as integral to the process of learning and spurring creativity – inciting a willingness to progress and to develop. Conversely, extrinsically motivated actions can be performed with resentment, resistance and disinterest.

Intrinsic motivation can be offset by material reward undermining a perceived autonomy – as detailed by Richard M Ryan and Edward L Deci, professors of psychology at Rochester University. They suggest extrinsic rewards can often demotivate individuals; material rewards have an inherent tension with senses of well-being and learning. Financial success, moreover, is said to represent a controlled orientation that conflicts with self-acceptance or affiliation.

Deci and Ryan’s hypothesis has support – authors Barry Gerhart and Sara L Rynes similarly conclude: “One curious feature of the pay level/pay satisfaction literature is that there are virtually no studies that correlate pay level with general job satisfaction.”

Assman goes on to define the means by which intrinsic and extrinsic motivations can co-exist in spurring “self determination”: “External interventions crowd-in intrinsic motivation if the individuals concerned perceive it as supportive. In that case, self-esteem is fostered and individuals feel that they are given more freedom to act, thus enlarging self-determination.”

A template for motivation
Intrinsic motivation can be seen as both highly indeterminate and utterly unique to the individual, though the components of intrinsic rewards are generally accepted as being loosely split into four steps. Each step requires workers to make a judgement in their line of work:

Worth: This facet entails the perceived importance of a given task. The idea of working on something both fulfilling and valuable can instil a sense of purpose and direction.

Choice: Being allowed a degree of flexibility in performing tasks is integral to an employee’s sense of responsibility.

Progress: A sense of having accomplished something of worth is of an immeasurable importance in eliciting a greater extent of working confidence.

…extrinsically motivated actions can be performed with resentment, resistance and disinterest

Some theorists, such as Steven Reiss of the Ohio State University, have suggested the duality of intrinsic-extrinsic motivation is a hindrance to better understanding the nature of value and self-determination. Reiss argues the motivational by-product of rewards depends upon the reasons for their being given. He said: “If you reward a person for just spending time in an activity, the person will become bored with the activity. If you reward a person for learning a new skill, however, the person is likely to show greater interest in the activity.”

Reiss also writes of the symbolic quality of rewards: “When a reward symbolises
success, for example, intrinsic interest should be enhanced.” Here, Reiss details one such way in which a better understanding of motivation can potentially better working conditions.

The new world
Motivational dynamics such as these have changed dramatically in recent years – predominantly in alignment with the ever-changing requirements and expectations of contemporary society. A greater amount of automation and a tendency towards off-shoring has eliminated many of the US’ highly repetitive and menial jobs.

These changes have paved the way for more responsive and dynamic organisations, requiring employees to use both their judgement and initiative to a much greater extent than was required in the past.

Today’s corporate environment demands sustainable profit-making potential more than ever before. This is achieved by attracting and retaining top talent. Many of the world’s leading corporations offer generous incentive programmes to better motivate employees, ensuring the retention of valuable talent.

Both Larry Page and Sergey Brin, on their founding of Google in 1998, sought to distance the company from the culture of greed typical in many of the world’s leading corporations and instead focus on spurring intrinsic motivation.

In a similar manner, the building of the Googleplex was intended to mirror a college campus mentality, in that the base contained a host of useful facilities and services apart from the working norm. On its completion, then-CEO Eric Schmidt said: “We realise and celebrate that our employees have diverse needs, and that this diversity requires flexible and individually directed support. Our priority is to offer a customisable programme that can be tailored to the specific needs of each individual, whether they enjoy ice climbing in Alaska, want to retire by age 40 or plan to adopt three children.”

Other large corporations have emulated Google’s approach. The online shoe and apparel shop Zappos is distinctive in that it employs a full-time life coach whose purpose it is to direct employees in matters of career development, weight loss and finances. The Amazon subsidiary employees an almost exactly even split of men and women, with women presently holding 51 percent of the managerial positions.

The modern condition
The Ivey Business Journal maintains that, whereas in the past work was generally considered more routine and bureaucratic, offering fewer intrinsic motivations, intrinsic rewards are now a greater part of working life. Workers’ expectations have experienced a marked generational shift. Younger employees demand a greater level of independence – a result of their having been raised in an era of rapid technological change. With their being granted instant access to data and having to adapt to constant technological progression, workers are expected to demonstrate a greater air of independence and a far more diverse means of accomplishing tasks.

Workers have instant access to data and have had to adapt to constant technological progression, so are expected to demonstrate greater independence and more diverse methods of accomplishing tasks. Such is the case with North Carolina-based software developer SAS Institute. CEO James Goodnight says: “We have gone to great lengths to provide a work environment that not only addresses employees’ basic needs, but that also inspires them to use their creative talents.” The leading multinational offers heavily subsidised childcare, onsite healthcare and fitness centres to employees, among many other incentives.

Applicable across industries
Examples of corporations instilling a like-natured company culture are to be seen across a spectrum of industries. NuStar Energy offers a private jet to employees in need of emergency transport, and both Mattel and Hasbro offer employees half-day working hours on Friday, year round.

Though considered gimmicky by some, such means of inciting motivation among employees are crucial in sustaining a productive workforce. Those failing to adhere to such schemes are yet to reap the benefits.

If employers want to motivate employees, they have to recognise the importance of both intrinsic and extrinsic motivation, acknowledging the validity and consequence of material and psychic rewards in the working environment. It’s not enough for employees to be paid for their time: as the demands placed on them become more complex, so must the rewards. And the stronger the talent, the more important it is you hold onto them.