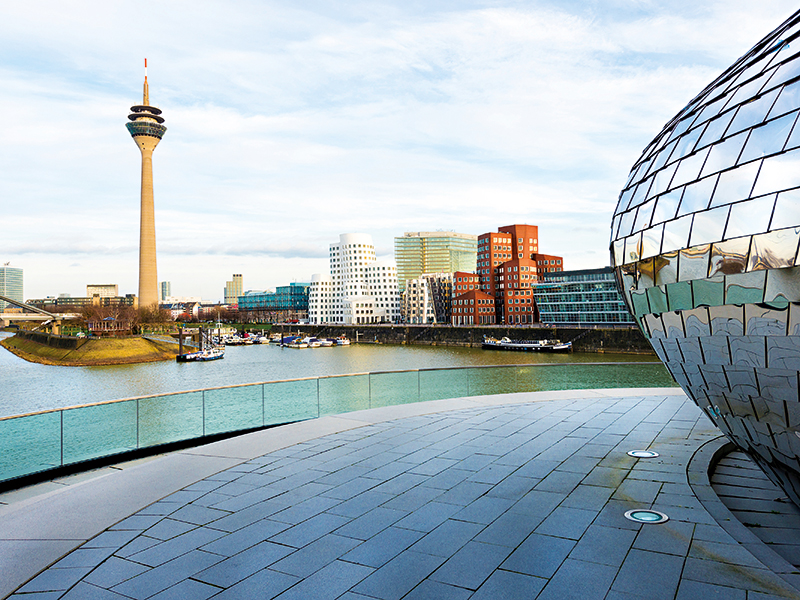 When it comes to choosing a European destination in which to conduct business, companies consistently seek a central location with a sizeable market – naturally, Germany is a popular choice. And, with a population of 17.9 million, North Rhine-Westphalia (NRW) is the most populous of the 16 German federal states.

Approximately 160 million people live within a 500km radius of the state’s capital, Düsseldorf, representing almost one third of all consumers in the EU. From no other location in Europe can so many people with such high purchasing power be reached within such short distances as from NRW.

With six airports, a comprehensive transport network and a close proximity to the North Sea’s most active ports, NRW benefits from excellent infrastructure and represents one of the most important logistical hubs in Europe.

Home from home
With so many logistical benefits, NRW has garnered a reputation as the economic centre of Germany; 18 of the 50 highest grossing German companies are based in the state, including Bayer, Deutsche Post DHL, Deutsche Telekom and E.ON.

Further, a quarter of all German small and medium-sized enterprises call NRW home. These companies all benefit from the state’s 70 universities, which, with their 768,000 students, continue to train and nurture qualified specialists.

But it is not just German companies that feel at home in the state; NRW has established itself as the leading investment location for companies from all over the world. More than 18,000 foreign companies currently control their German or European operations from NRW, with global players such as Ford, Toyota, Huawei and BP among the most prominent.

This global success has prompted fDi magazine to name NRW as the number one destination in its European Regional Overall category – ahead of Île-de-France and South-East England.

Bracing for Brexit
In fact, many British companies have set up shop in NRW: for example, the UK’s leading online retailer for household appliances, AO, has based its European headquarters in the region. Perhaps even more notable is telecommunications provider Vodafone, which not only manages its German business from Düsseldorf, but also operates its Innovation Park in the region, where it develops new services and technologies.

Further, with the UK’s decision to leave the EU forcing companies to reimagine their European strategies, more British companies are starting to emigrate to Germany and, more specifically, NRW. For instance, UK cosmetics manufacturer Lush recently opened a new production facility in the region and, as negotiations between the UK and EU continue, many more look set to follow.

More than 26,200 UK citizens live in the region, equating to one in every four Britons currently residing in Germany. This can be attributed, in some part at least, to NRW’s comprehensive, UK-style infrastructure, which provides dwellers with the perfect environment in which to settle. This symbiotic relationship between the UK and NRW dates back more than 70 years, to when the state was actually founded by the UK Government during its occupation of Germany.

Today, this long-standing partnership is facilitated by NRW Invest, a state-owned development agency that acts as a point of contact for foreign companies looking to establish investment projects in the German state. By providing a platform for companies to voice their ambitions, NRW Invest helps prospective clients establish valuable connections in the region and identifies the perfect location for each investment project during the analysis and planning phase.

Ultimately, NRW Invest’s team of experts optimise each client’s prospects in one of world’s most valuable markets, ensuring international companies receive all the support necessary to develop their European operations in a post-Brexit world.