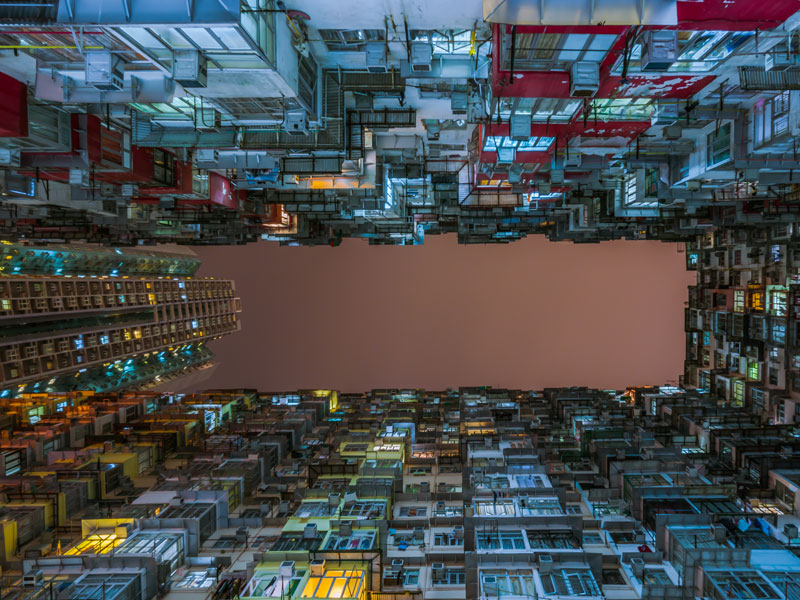 Hong Kong’s micro-units are used to house the more than seven million people who live in the Chinese region. Measuring less than 200 sq ft, the apartments provide a low cost housing option for those living in cities

According to a report by the UN, 55 percent of the world’s population currently lives in an urban or peri-urban space, and that figure is predicted to rise to 66 percent by 2050. However, rising urban populations have a significant impact on the amount of physical space available within cities, but space that is used for residential and commercial buildings, transport infrastructure and green areas.

The more people in the city, the less space for infrastructure to support those people

It boils down to a simple equation: the more people in the city, the less space for infrastructure to support those people. Pintus told The New Economy: “Space is now a luxury, and city agencies are constantly torn between the necessity of providing more room for living areas and related services versus preserving and providing a high-quality public realm.”

Implications of growth
Population growth and lack of space is an especially prominent issue in developing nations, as cities do not have the bureaucratic capacity or the funding to expand at the necessary rate. By 2030, the world is projected to have 43 megacities with more than 10 million inhabitants, most of them in developing regions.

Delhi is forecast to become the world’s largest city by 2028, however, the city currently faces a number of problems such as lack of clean drinking water, the absence of green spaces and inadequate sewage systems. These problems will only be exacerbated by a spike in urban population.

Cities in first world nations aren’t without their problems either. Space, be that residential or commercial, is at an absolute premium in cities such as New York and Paris. Rising housing costs often surpass average wage growth, making these cities unaffordable places to live.

This presents a multi-faceted problem, both for governmental organisations that oversee city growth and current or prospective residents. The demand for urban space persists but the infrastructure is not developing in a rapid or affordable enough way to support an influx of city-dwellers.

Solutions not problems
Enterprising firms across the globe are developing solutions to tackle conundrum facing cities. One that has been trialled in cities across the globe is the building of micro-units. The trend for these miniature homes can be directly linked to accelerating urban populations across the globe; as the number of city residents has increased, so has the construction of micro-apartments.

In 2012, then New York City Mayor Michael Bloomberg announced the city’s first pilot project of micro-units, located in the Kips Bay area of Manhattan. Each unit offers around 275sq ft of floor space, well below the minimum 400sq ft requirement set by the New York housing regulator. Bloomberg told Reuters at the time: “People from all over the world want to live in New York City, and we must develop a new, scalable housing model that is safe, affordable and innovative to meet their needs.”

Micro-apartments have subsequently become more widespread, appearing in cities across the globe, including Hong Kong, London and Shanghai. The trend has proven particularly popular in Germany, where there are more than 25,000 micro-homes across the country, as the federal government has agreed to allocate €120m ($139m) to facilitate market expansion. These types of homes have myriad benefits: not only do they maximise the availability of reasonably priced residential urban space, but they also cater to the growing numbers of people who want to live alone.

The rise of micro-apartments has also opened up a new sector for developers: co-living spaces. The idea is partly an offshoot of the co-working space phenomenon, which allows companies to rent a desk or small office with access to certain facilities, for less than it would cost to rent an independent office space. Co-living spaces are now popping up all over European cities, such as LifeX in Copenhagen and Vonder in Berlin, offering reasonably priced apartments with perks such as weekly communal dinners and unlimited streaming service subscriptions.

There is a growing movement against individualism and a renewed romanticism of community, which is feeding into space-sharing norms

Tim White works on the London School of Economics Cities programme, which conducts research into the changing nature of cities around the world. He said: “People’s conceptions of home are certainly changing, but it can be debated whether this is out of choice or necessity. Advocates of co-living, for example, suggest that the rising popularity of these spaces is about shifting attitudes: a growing movement against individualism and a renewed romanticism of community. But this could also be seen as people normalising and adapting to the increasing cost and precarity of housing in cities.”

Commercial reinvention
Aside from housing and office facilities, urban space comprises five features: transport infrastructure, cultural institutions, educational establishments, green spaces and amenities such as hotels, cafes and retail stores. The majority of these features are fixed in terms of the space they occupy. However, certain amenities are ripe for spatial economisation. Space10, IKEA’s ‘future-living lab’, recently unveiled a project that was designed with that exact goal in mind. Working in partnership with foam Studio, the company has designed autonomous vehicles that could replace our local institutions.

The project, called Space on Wheels, features seven self-driving cars that can house shops, farmers’ markets or hotels, freeing up static space for housing or green spaces. The vehicles could also save on space currently used for transport infrastructure. Simon Casperson, Communications Director for Space10, explained: “These vehicles could potentially free up a lot of the space we use for car parks. Traffic lights and stop signs could disappear too: these vehicles could instead navigate the streets by communicating with each other rather than obeying traffic signs, which means we would need a lot less space for lanes on the roads too.”

Necessity breeds innovation
One only needs to inspect any world-leading modern city to ascertain that innovation, creativity and success are found at the very centre of that urban space. Areas such as Shanghai’s Pudong City, New York’s Manhattan or London in the UK will continue to be sought-after as long as urban spaces exist in their current incarnation, principally because they represent a concentration of opportunities for work and pleasure.

However, space in such areas is limited by geographical or regulatory factors and businesses are forced to come up with ways to maximise the finite amount of space available to them. Fortunately, necessity breeds innovation, and as technology becomes more advanced, enterprising firms such as Space10 are better equipped to create cutting-edge solutions to combat the fact that urban space is becoming an ever more rare and valuable commodity.

The development of space-saving solutions such as autonomous driving amenities and micro-units ensures that as many people as possible can enjoy the benefits of these thriving urban spaces for years to come.