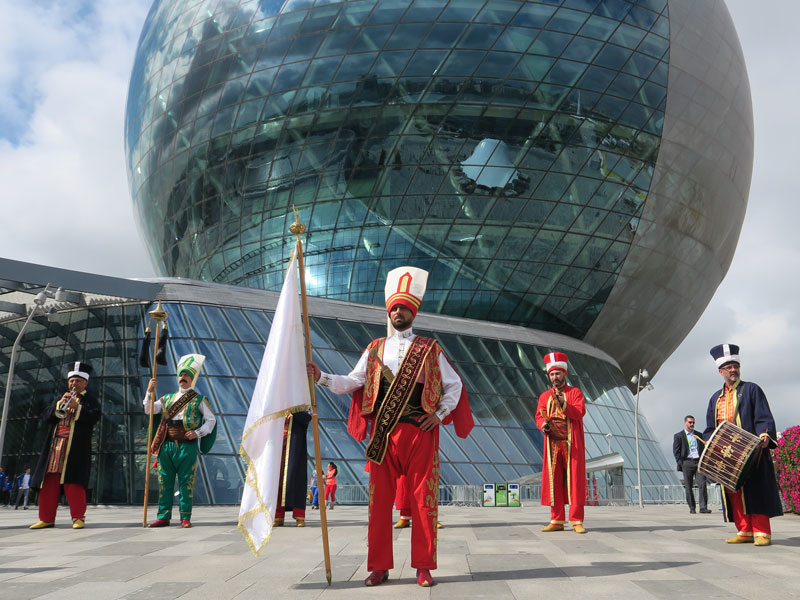 Nursultan Nazarbayev has been Kazakhstan’s one and only president since the country gained independence from the Soviet Union in 1991. Described by the leader as “a democracy that kept electing the same leader”, the country is guided by the principle of “economy first and then politics”.

Wedged between China and Russia, Kazakhstan is the world’s largest landlocked country. Beneath the sparsely occupied steppe landscape, where there are more wolves than people, lays an abundant supply of mineral resources that acted as the driving force behind impressive economic growth in the early 2000s. The country has the 11th largest oil reserves in the world, accounting for three percent of global supplies. Energy, 80 percent of which is derived from coal, comprises just under half of its GDP.

The oil price crash of 2014 and the crisis in Venezuela convinced Nazarbayev, along with other oil-based nations, of the value of a diversified economy

Yet, in 2013, Kazakhstan launched the Concept of Transition towards Green Economy until 2050, outlining its future development path. The document set out a number of ambitious targets for the country, including sourcing 50 percent of its energy from renewable sources by 2050. An interim goal of 30 percent by 2030 is still three percentage points higher than the EU’s target.

Professor Yelena Kalyuzhnova, Director of the Centre for Euro-Asian Studies at Henley Business School, explained why the Kazakhstani president has drawn up such a hefty plan of environmental and economic reform: “To date, economic growth has driven increased demand for energy services, making the construction of additional generating capacity increasingly necessary for enabling sustained growth.

“In this context, renewable energy resources are becoming an increasingly attractive option to help bridge the demand-supply gap. The renewable energy industry can contribute to economic diversification and job creation in the country.”

As well as shrinking the country’s carbon footprint, Nazarbayev is aiming to achieve an annual growth rate of three percent and to create 500,000 new jobs.

A change of tact
The oil price crash of 2014 and the crisis in Venezuela convinced Nazarbayev, along with other oil-based nations, of the value of a diversified economy. Dogged by slowing growth in 2015 and 2016 and a sharp depreciation of the tenge, the Paris Agreement added to the impetus to change tact.

Kazakhstan is already the largest recipient of foreign investment of all post-Soviet countries and Nazarbayev has determined that the transition to a green economy will depend on increased overseas funding. At the centre of his plan is the capital city Astana. Now a showcase of modern Kazakhstan, it was formerly a small village known as Akmola. Since being named the new capital of the country 21 years ago, gold and glass buildings have sprung from the grassy fields once described by human rights activist Jeri Laber as “Stalin’s dumping ground”.

To erode any residue of the country’s Soviet legacy, liberalisation of the economy and the privatisation of state-owned companies remains a priority. As part of this process of de-Sovietisation, the Kazakhstani language, which presently uses modified Cyrillic characters, will convert to a Latin script in 2025. English is also now on par with Russian as the most taught foreign language. As Russia is the largest importer of Kazakhstani coal, a move to renewables will help create a self-sufficient Kazakhstan and further diminish Russian influence.

Green potential
In 2017, Kazakhstan was chosen to host the Expo 2017 international exposition, the theme of which was ‘future energy’. The event, which lasted four months, was attended by 115 countries, 22 international organisations and visited by over 3.86 million people. The country spent $5bn building an entire city in which to host the exhibition, including the spherical, eight-floor Nur Alem museum.

From the outset, Kazakhstan has used its opportunity on the world stage to showcase its vision of an economic transformation centred on sustainable development, foreign investment and renewable energy. Currently, just one percent of Kazakhstan’s energy is renewably sourced, but its extreme climate, where temperatures can range between -50 degrees Celsius and 40 degrees Celsius, provides substantial opportunities.

Kazakhstan’s considerable agriculture output – the south of the country is one of the largest producers of apples and walnuts in the world – holds the potential for substantial bioenergy production. Currently, the area is poorly exploited, with crops regularly left to rot.

Speaking to Bioenergy International, World Bioenergy Association President Remigijus Lapinskas explained that advances are being made in Kazakhstan’s bioenergy sector: “In Kazakhstan, the utilisation of agricultural residues for heat and electricity looks promising. The future development of biomass is encouraging and we encourage our members and other technology companies to explore the possibility of technology and knowledge transfer to the region.”

Due to its geographic location on the wind belt of the northern hemisphere, roughly half of Kazakhstan’s territory experiences average wind speeds suitable for energy generation. Kazakhstan has vast potential for wind energy development and could garner 10 times more power than it needs from wind energy alone.

The country could also power itself solely on solar energy. Kazakhstan receives an average of 200 sunny days each year; in the south of the country, this figure can reach 300. By 2020, 28 solar energy projects are scheduled for completion.

Richard Pomfret, a professor of economics at the University of Adelaide, said: “Kazakhstan’s position on renewables is interesting insofar as it is a major oil and coal exporter that is also pursuing ambitious renewables targets. In the long run, this is a feasible strategy given the solar and wind energy potential.”

In May 2018, the European Bank for Reconstruction and Development (EBRD) collaborated with the Clean Technology Fund and the Asian Development Bank to support a 50MW solar power plant in Baikonur. The plant will reduce annual CO2 emissions in the country by 75,000 tonnes. Anton Usov, Chief Spokesperson for Eastern Europe, Caucasus and Central Asia at EBRD, told The New Economy: “There are many more similar projects up our sleeve. The country is an undisputed leader in renewables in Central Asia – long it may continue.”

Reasons for caution
For Nazarbayev’s vision to become a reality, there are still significant obstacles to navigate. “While the government is adopting new legal frameworks to encourage the transition towards renewables there are still significant barriers,” said Kalyuzhnova. “Low electricity tariffs, transmission losses and inefficient technologies, along with a weak regulatory and legal framework and a risky business environment, are the main impediments.”

Human rights violations and corruption have long tainted the region. According to Human Rights Watch’s World Report 2016: Kazakstan, “Kazakhstan heavily restricts freedom of assembly, speech, and religion”. Transparency International’s latest Corruption Perceptions Index ranks Kazakhstan 127th out of 180 countries and, according to a 2016 GAN Business Anti-Corruption report, companies cite corruption as the number one constraint of doing business in Kazakhstan.

As a result, inequality has drastically widened, highlighting the country’s mounting social problems. Rising crime, growing deprivation among the urban poor and a lack of public faith in the police are just some of the issues blighting Kazakhstan’s development. While the country has a near 100 percent literacy rate, rural schools suffer from a lack of resources and overstretched facilities.

The ambitious and ultra-modern architecture of the Astana skyline makes it look as though it’s from another world; the reality for thousands of Kazakhstani citizens is precisely that. Outside the capital, infrastructure for communities remains non-existent, running water is a pipe dream, roads are just tracks in the sand.

While the poverty level in Kazakhstan is reported to be just 2.6 percent, rural communities continue to struggle. Kazakhstan’s annual income per capita in 2017 was only $3,001, equal to about $8.20 per day. The government has pledged to encourage development across all areas of the country, however rural residents claim officials have never even bothered visiting certain areas. It is hardly surprising that some Kazakhstani citizens believe the government’s priorities are misplaced.

As Kazakhstan develops for the future, it is yet to be seen whether green technology will promote fair and diverse economic development across the whole country or simply enrich the self-perpetuating Astana elite in their golden towers.