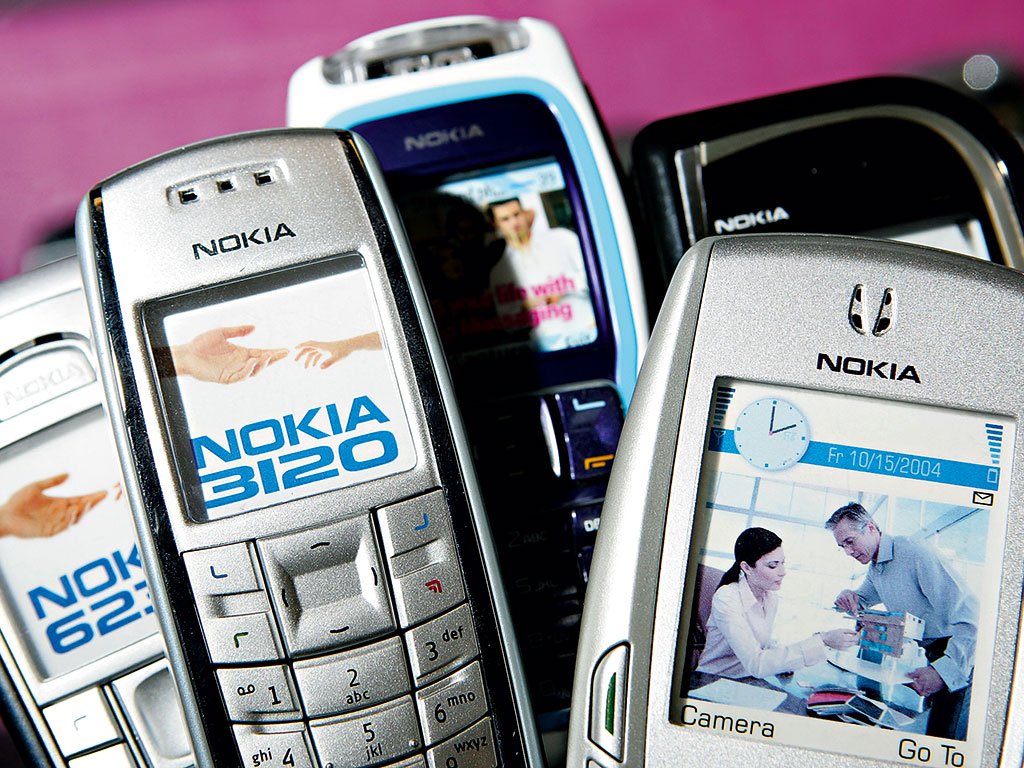 Various phone models from Nokia’s time as a market leader, including the hugely successful 3210. Under Chief Executive Rajeev Suri, Nokia has focused on its business-to-business operations

A decade ago, the mobile phone market was roughly split between two leading players. The leading maker of smartphones – handsets that weren’t anything like as popular then as they are now – was Canada’s Research In Motion, with its BlackBerry phone. Dominating the consumer, lower-end of the market that accounted for the majority of sales was Finland’s Nokia.

The Finnish telecommunications giant had a long history of building various communications technology, but had captured a huge portion of the newly widespread mobile phone market by the turn of the millennium. With simple and cheap phones – and long-lasting batteries that would be unthinkable today – Nokia dominated a very different mobile phone market.

However, things slowly started to change around 2005. BlackBerry’s popularity among business people started to spread into the consumer market, with customers keen to utilise the advanced online features of the phones. While Nokia began offering its own similar products, it never quite achieved the obsession BlackBerry managed to stir up in its customers.

Amount paid by Nokia for Alcatel-Lucent

Then, in 2007, the entire industry was shaken up by the arrival of Apple’s iPhone. Blending many of the high-end services found in smartphones with a consumer-friendly design, the phone made Nokia’s previous efforts look incredibly old hat in just a matter of months. From a 62.5 percent share of the market at the end of 2007, Nokia fell to 40.8 percent 12 months later. The steady decline continued apace in the years to come, with new entrants such as Samsung using Google’s new Android platform. Market share fell to 32 percent by the end of 2010.

Today, the smartphone business is dominated by Android-based phones made by companies such as Samsung and Huawei, Apple’s iPhone, and, to a lesser extent, Microsoft’s Windows Phone. Nokia no longer features, while BlackBerry continues to flounder in its efforts to recapture its lost audience.

Changes afoot
Nokia has undergone a profound change over the last year. It welcomed a new CEO in 2014 – Rajeev Suri – and has begun to shed some of its less profitable businesses. It has also started to focus on its business-to-business operations, bolstering its networking capabilities. The three main operations of the company will be its Here mapping service, the infrastructure networking business Nokia Networks, and its development arm Nokia Technologies.

Suri told telecoms industry magazine European Communications the company was also looking at selling it’s little used but industry praised mapping service Here. The service could prove to be an extremely valuable one to other companies reliant on the likes of Google or Apple’s mapping products. It’s thought Here has received considerable interest from German car manufacturers keen to embrace the internet in their new designs, with a consortium of BMW, Mercedes-Benz and Audi rumoured to be putting together an offer. Chinese carmaker Baidu has also expressed an interest, while Taxi app Uber is also reportedly looking at the service; the company has grand ambitions in a number of transport-related businesses. However, Siro has also said the company is in no rush to sell Here, and will only do so if it makes sense to the whole of Nokia’s future operations.

Another big change at Nokia was announced in April, when it revealed it would be acquiring French telecommunications equipment company Alcatel-Lucent for around €15.6bn. One of the leading developers of fixed, mobile, and converged networking hardware, Alcatel-Lucent represents a non-consumer-facing new string to Nokia’s bow. It will also bring one of the industry’s largest research and development facilities, Bell Laboratories (a subsidiary of Alcatel-Lucent), into Nokia’s stable, helping the company continue its position as a key industry innovator. However, while the company has been busy bolstering its corporate services operations, the consumer business has lain dormant. As part of the deal, a new development centre for 5G technologies will be based in France, and the company will create an investment fund worth €100m.

Announcing the deal, Suri said in a statement: “Together, Alcatel-Lucent and Nokia intend to lead in next-generation network technology and services. Our innovation capability will be extraordinary, bringing together the R&D engine of Nokia with that of Alcatel-Lucent and its iconic Bell Labs. We will continue to combine this strength with the highly efficient, lean operations needed to compete on a global scale. We have hugely complementary technologies and the comprehensive portfolio necessary to enable the [Internet of Things] and transition to the cloud. We will have a strong presence in every part of the world, including leading positions in the United States and China. I firmly believe that this is the right deal, with the right logic, at the right time.” If the deal passes the various regulatory hurdles, it will be confirmed by early next year.

Comparing contracts
Just last year, Nokia seemingly retreated from the consumer smartphone business when it announced it would be selling that part of its operations to Microsoft. The deal came three years after a strategic partnership was announced between the two faltering companies – a partnership that was seen more as a marriage of convenience than one of genuine desire. However, with the US tech giant rebranding the phones as Lumia Windows Phone, Nokia’s once-ever-present name no longer had a presence in the mobile phone market.

Rumours emerged in April that Nokia would return to the smartphone business in 2016 but were quickly quashed by the company. The reports suggested the company had begun hiring staff in its smartphone business in anticipation of the expiration of its exclusivity deal with Microsoft, which barred it from selling smart devices until the end of 2015. However, Suri acknowledged in an interview with Germany’s Manager Magazine the company was “looking for suitable partners” in the smartphone market.

In what form a new Nokia smartphone will emerge remains to be seen. It ceased development of its own Symbian mobile operating system in 2014, having primarily used Microsoft’s Windows Phone OS for the previous three years. While developing its own software might differentiate it from the competition, it seems unlikely Nokia would want to cut itself off from potential customers so used to Google’s ubiquitous Android platform, or former Windows-based clients.

Suri has since said the company would not look to manufacture phones, but instead license its designs and brand name to third parties. By utilising its expertise and experience, Nokia could offer a third-party manufacturer the chance to develop a truly unique rival to the dominant Apple and Samsung handsets.

What Nokia will do next remains unclear. It holds a strong position in the network infrastructure market, while its reputation for innovation is still relatively intact. While Apple and Samsung’s dominance of the smartphone business seems insurmountable, Nokia knows all too well that once-dominant players can be easily booted out with the emergence of an innovative upstart.