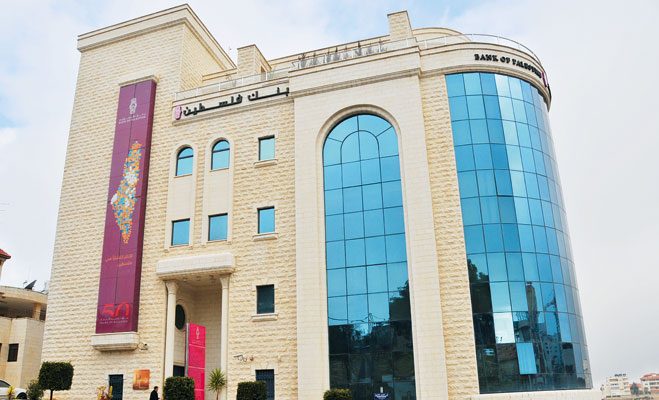 How does the Bank of Palestine compare to other banks within the country?
There are eighteen banks operating in Palestine, eight of which are Palestinian (two of these are Islamic banks). Another eight are Jordanian, one Egyptian, and one is a branch of HSBC. We are the first and the largest Palestinian bank with 47 branches out of a total of 213 branches. Established in 1960, BoP has a paid-up capital of $120m, and assets of over $1.6bn. It has more than 1,100 employees – which makes it one of the largest private employers in Palestine – and has more than half a million customers.

Our board of directors and the executive team are based in Palestine; this gives BoP a significant competitive advantage, and enables us to know and understand our clients and the local business environment better. We also have a young, innovative management team; something particularly important in Palestine, with around 75 percent of the population under the age of 35. Not only are we present in all the main cities of Palestine, but we’ve also pioneered the opening of branches in unbanked and rural areas. These rural communities have proved to be really important sources of deposits and offer great potential for SME loans and micro loans.

BoP is the sole issuer and acquirer of Visa and MasterCard in Palestine. This gives the bank a significant competitive advantage, because it owns the Point of Sale network in Palestine (which acquires the cards), it is able to develop special BoP cards that meet the needs of its clients, such as BoP’s ‘EasyLife’ card, which is a local instalment card. BoP has played a pioneering role in improving access to finance to businesses of all types, including micro, SME, large projects and syndicated loans. The bank has established specialised micro and SME units in order to better understand the needs and serve these clients effectively. The bank has even recognised the necessity to cater to the needs of the emerging young, entrepreneurial Palestinian population.We’re also providing Palestinians living outside Palestine with an extensive range of financial services, through the recently established ‘Diaspora Unit’ at the bank, with a team dedicated to connecting and strengthening bonds with Palestinians living in the Diaspora. In the past few years, we’ve established an excellent relationship with the Palestinian Diaspora in Latin America, specifically Chile (where there are 500,000 Chileans of Palestinian origin). The bank is also establishing excellent relationships with the Palestinian Diaspora in other countries and regions, such as the US, the Arabian Gulf, and other countries in Latin America such as El Salvador, Honduras, Guatemala, Peru and many others.

What is your role within the bank?
Well, to be frank I don’t like sitting behind my desk, so I’ll always take up any opportunity to get out and visit clients and branches. I really enjoy seeing the bank in action in all its areas of activity and I also greatly enjoy seeing and understanding the needs of all types of clients from the micro entrepreneur to the mid-size family business to working on a hugely important $100m utility company-syndicated loan.

I like to bring innovation and a competitive edge to the bank, while establishing and pursuing a long-term vision and making sure that every employee understands the vision and knows precisely what their role is in bringing that vision to fruition. I also actively promote the role of women in the bank, especially in more senior positions and we are always trying to improve the percentage of women employed overall.I see myself as on something of a mission to bring Palestine, and BoP, cutting-edge technologies that can offer maximum competitive impact. In fact, my father started the Point of Sale (POS) network in Palestine in 2000, although at the time many thought it was too early for Palestine to have such a network.  This was and still is part of the bank’s overall vision

How does BoP follow up on Corporate Social Responsibility (CSR) initiatives?
We believe that true progress begins with social and economic development on a community level. As the first and largest bank in Palestine, social and environmental responsibility has been central to business since our founding in 1960 and we believe that: “It pays to do good”.

Without a sustainable community, we can’t have sustainable businesses. BoP has consistently revised its strategy to integrate sustainability into its core businesses operations. We dedicate around five percent of our net profit to CSR. In 2011 alone, BoP’s CSR budget exceeded $1.7m, and covered several sectors including: Youth and sports, education and entrepreneurs, health, arts, culture, tourism, and other humanitarian work.
We have also started a widespread national programme called the ‘Zamalah Fellowship Programme’, which aims to raise the calibre of education in Palestinian universities through building the capacity and increasing the exposure of university professors by sending them to academic and other professional institutions for a period ranging between one semester to a full year. BoP is also working on expanding this programme by inviting other private sector companies and individuals to contribute to the fund.

What role have banks in Palestine played in leading economic initiatives for the progress of the region?
The banking sector in Palestine has played a proactive role in several key economic initiatives. Most importantly these include: Microfinancing, syndicated loans (we are the market leader) and large project financing, developing the mortgage industry and working to instigate the first private pension fund in Palestine, and finally, trying to attract the best foreign investment possible for the region.

What regulatory changes have affected the Palestinian financial sector? What have been the key developments concerning the implementation of Basel II?
Since 2007, the Palestine Monetary Authority (PMA), which was established in 1994, has made notable progress in institutional reform, which has enabled it to fulfil the core functions of a Central Bank.

These functions include the application of a rigorous banking supervision and regulatory framework, providing a strong credit and payment infrastructure, and monitoring compliance with a governance code and an anti-money laundering law. The PMA has advanced towards the implementation of Basel II standards, and was one of the  first in the region to integrate an electronic credit scoring system into the credit registry in 2010.

This has been an important contributor to the rise in Palestine’s bank credit to the private sector. The system has also contributed to the decline in bounced cheques by 25 percent.
Furthermore, an electronic payment system was also installed in 2010, including a ‘real-time gross settlement’ system, which has significantly raised the bank’s payments efficiency and reduced its liquidity risk. An Anti-Money Laundering Law has also been enforced in line with international standards.

What does the Bank of Palestine do to stay ahead of regulatory changes and how is this reflected on its clients?
In relation to risk management and corporate governance, BoP was not satisfied by limiting itself to implementing the systems required by the Palestine Monetary Authority (PMA) and the Palestine Capital Market Authority (PCMA). The point is that the bank is aiming to implement risk management systems that meet international best practices. So, in the past few years – and in co-operation with the International Finance Corporation (IFC) – BoP has developed comprehensive risk management structure systems, procedures and processes, as well as promoting and strengthening corporate governance practices that now meet international best practices.

Tell us about BoP’s leading role in encouraging local environmental partnerships.
BoP is considered the leading ‘green’ bank in Palestine, as it was the first bank to implement an all-encompassing sustainability strategy. However, this strategy was not created just to enhance the brand, B0P strongly believes that to achieve greater long-term value, it is important to go beyond written policies and put strategy into action.

This is why BoP has committed special resources and teams to monitor the implementation of the strategy, training employees and increasing awareness along the entire supply chain. By continuously developing the strategy, products and services, it can meet the changing needs of its customers, environment and region.

What’s next on the cards for BoP? What are you hoping to achieve within the next five years?
The company is hugely optimistic about what it can achieve in the years to come.

Currently, the bank is the only issuer and acquirer of Visa and MasterCard in Palestine. Therefore, it will be putting a lot of effort into increasing the awareness of the ‘plastic culture’ in Palestine. BoP’s credit card portfolio grew by 28 percent in the last year and fees from the existing card and POS business increased by 354 percent over the past four years. As a result, the firm expects this business to continue to significantly grow again, doubling again in three years.

In 2011 BoP founded PalPay, a company that enables clients to electronically pay different utility bills and top up their mobile credit using the bank’s POS network of around 5,000 stations spread throughout Palestine. PalPay will also enable clients to pay their bills via the internet or via mobile phones. The company has been signing agreements with different service providers, who are interested in offering this service to their clients around Palestine, and the PalPay service is expected to be fully unveiled to clients in the beginning of 2012. PalPay has received a lot of interest from international institutional investors and there are plans to take this company to other markets. In 2012, BoP will be continuing local expansion through new branches and ATMs. The bank will also focus its international efforts through connecting to the Palestinian Diaspora, as well as opening a new representative office in Chile.