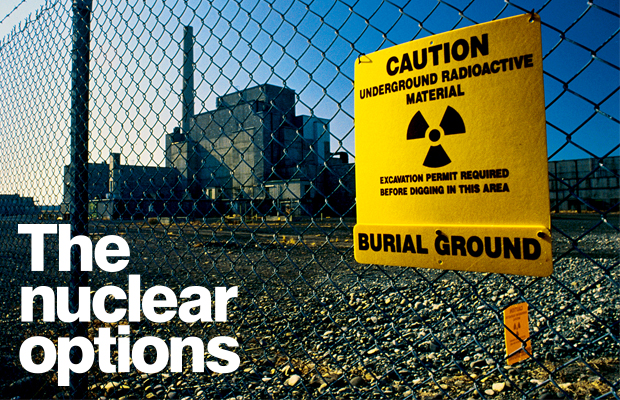 In Benton County, Washington stands a characterless flatland scattered with the distinctive manufactories of a Cold War arsenal. What was once a community of neighbourly Americans is now spread and underlined with 1,518 square kilometres of disused nuclear material confined by 177 colossal storage units. The Hanford site – otherwise known as the Hanford Nuclear Reservation – is a cleanup project tasked with the disposal of nuclear and chemical waste: one that was reported recently as having six, severely neglected, leaking tanks.

Each of these tanks contains disused nuclear material originating from as far back as the site’s establishment in 1943. Having been purpose-built during the Cold War to provide plutonium for the US nuclear arsenal, it was duly decommissioned, leaving 53 million gallons of radioactive waste in its wake. With 73 leaks to date, the effects of Hanford’s contamination are seeping ever closer to the Columbia River; illustrating, in part, the consequences of radioactive waste on American soil.

Currently the nation’s largest environmental cleanup, the Hanford site is one of the US’ many outdated and disconcertingly temporary solutions to the disposal of nuclear material. The country’s stance on nuclear waste disposal requires a great deal of financial investment; as well as a significant departure from the marked hesitancy with which it is currently advancing towards a more comprehensive nuclear future.

A commercial industry
Nuclear power has been, and still is, integral to the US’ status as a world superpower: at present accounting for more than 20 percent of America’s energy supply. Having carried out the Manhattan Project and developed the atomic bomb, the country built its first nuclear reactor to produce electricity at the National Reactor Station in Idaho, 1951.

Since then, the government has dedicated a vast amount of resources to the advancement of nuclear power and, in the mid-1950s, extended this opportunity to private industry. Commercial reactors in the US are almost exclusively privately owned, demonstrating a marked difference from rival nations’ predominantly state-owned nuclear industries.

Since the late 1990s, US government policy and funding practices have furthered the development of civilian nuclear capacity. However, while there is an intended long-term commitment towards the furthering of nuclear energy supply, emphasis has been lacking in recent years as alternative means of power have taken precedence. America, more so than any other nation, demonstrates a great deal of private sector participation in the production of civilian nuclear power. Regardless of its nuclear credentials, it is a nation that often finds its way obstructed by rigorous safety and environmental regulations, as well as by unwillingness to invest in precautionary measures for the far future.

If the US’ existing reactors were to be relicensed for a further 60 years, they would contribute a further 130,000 tonnes of nuclear waste. It is imperative that the US invests heavily in the development of a safer, long-term and perhaps more renewable waste disposal policy.

The reasons for having not committed to a better waste disposal programme are primarily financial. Though opinions on the economics of nuclear power are widely divergent and regularly contested, nuclear power plants – while having high capital costs for the building of the station – provide for low direct fuel costs and for an exemption from carbon tax.

Comparisons with alternative means of generating electricity are highly dependent on assumptions about construction timescales as well as capital financing for the plant. Estimates for the construction of the plant mandatorily include plant decommissioning and nuclear waste storage costs, but these allowances are focused more on the short-term disposal of excess materials than the permanent neutralising of radioactive waste.

The big bang
Having experienced a crisis of credibility through the latter half of the 20th century, nuclear power saw a revival from 2001 onwards. The realisation of nuclear energy as a clean, safe and readily available energy source bolstered its reputation as a worthy investment for the future, as well as instigating the building of countless new reactors and extension units across the globe.

But after this short-lived revival, the demand for electricity demonstrated a marked fall, heavily impacting the construction of large energy projects such as nuclear reactors. The proportionately high upfront costs and long project cycles carried with them high risks in substantiating the continued development of nuclear reactors.

The availability of relatively cheap gas and its guarantees for the near future pose a constant threat to the continued development of nuclear power, particularly in the US and China. In Eastern Europe, a substantial number of long-established projects have struggled to find financial backing in the face of cheap gas – notably in Bulgaria and Romania, where potential backers have withdrawn funding for such projects.

The wider implications of nuclear-related disasters can impact heavily on the perceived costs of reactor construction and development. Following the Fukushima Daiichi disaster in 2011, costs rose significantly as additional requirements were introduced, specifically in the parameters of fuel management and elevated design basis threats.

One of the more prevalent discussions of nuclear economics is focused on the accountability and financial repercussions of future uncertainties. The associated risks of power plants developed and owned by state-owned or regulated utility monopolies fall on the consumers, as opposed to the suppliers.

Many countries are attempting to liberalise the electricity market, wherein the risks and associated costs of competing energy suppliers are borne by plant suppliers and operators. As a result, the economics of constructing and maintaining nuclear reactors can vary wildly.

Those responsible for the construction of US nuclear reactors, it seems, do not consider themselves responsible for the long-term implications of improperly disposed-of radioactive waste. Both costly and technically demanding, the methods of reducing and neutralising radioactive material are unattractive to those looking to minimise financial impositions.

A national priority
At the beginning of January, head of the DoE Stephen Chu outlined a programme meant to improve the US’ capacity for nuclear waste storage and disposal. Having maintained that nuclear waste “must remain a national priority… to ensure that nuclear power remains part of our diversified clean-energy portfolio,” Chu detailed a siting process that gave greater focus to co-operation with the local community than previous efforts.

The adoption of this method is a direct result of the cancellation of the Yucca Mountain nuclear waste repository in Nevada: a deep geological facility that was to have offered securer containment for radioactive material. After 10 years of initial development and $32bn of funding, the idea was scrapped ñ to the financial cost of those involved – in large part due to the oppositional efforts of local inhabitants. Regardless of these plans having been cancelled, it’s clear – a notion echoed by the DoE – that a long-term repository is necessary for the ever-increasing levels of nuclear waste produced by the US.

The proposed strategy comes three years after the decommissioning of the Yucca Mountain site (agreed on by Stephen Chu and the Obama administration) and would entail the implementation of a ‘pilot interim store’ from 2021, meant for the recovery of unused nuclear fuel from decommissioned plants. By 2025, a further ‘full-scale interim store’ will be put into effect in order to better stabilise environmental conditions.

By 2048, construction of an underground disposal facility will have been completed to permanently store and dispose of nuclear waste. The resulting facility will be developed and constructed in strict co-operation with the local inhabitants and never to the detriment of those living or doing business locally.

Edge of darkness
The programme is scheduled in such a way as to better reduce the federal governmentís liabilities under the 1982 Nuclear Waste Act: starting in 1998, the US government was to have collected used fuel from energy companies and taken it for disposal. At present, 68,000 tonnes of used reactor fuel resides at 72 plants across the US and are largely responsible for the DoE having to reimburse power companies for meeting the costs of storage and of disposal.

The aforementioned interim facilities are to better reduce the backlog: the government having fallen behind with collections. The DoE said: “The sooner that legislation enables progress on implementing this strategy, the lower the ultimate cost will be to taxpayers.”

If approved, the DoE is to facilitate the founding of a new authority to monitor the development of the programme. The resulting organisation will survey suitable sites by evaluating the geological prospects and considering the effected community, asking the community to consider both the repercussions of the building and the potential benefit to the local economy. A similar approach has been used to great effect in both Sweden and Finland, and in both places geological disposal sites are in the licensing stage.

Waste management plans for preserving a far-off future are at a crucial stage. If the US is to better its capabilities in the disposal of radioactive waste, then it must recognise the necessity of implementing measures soon.