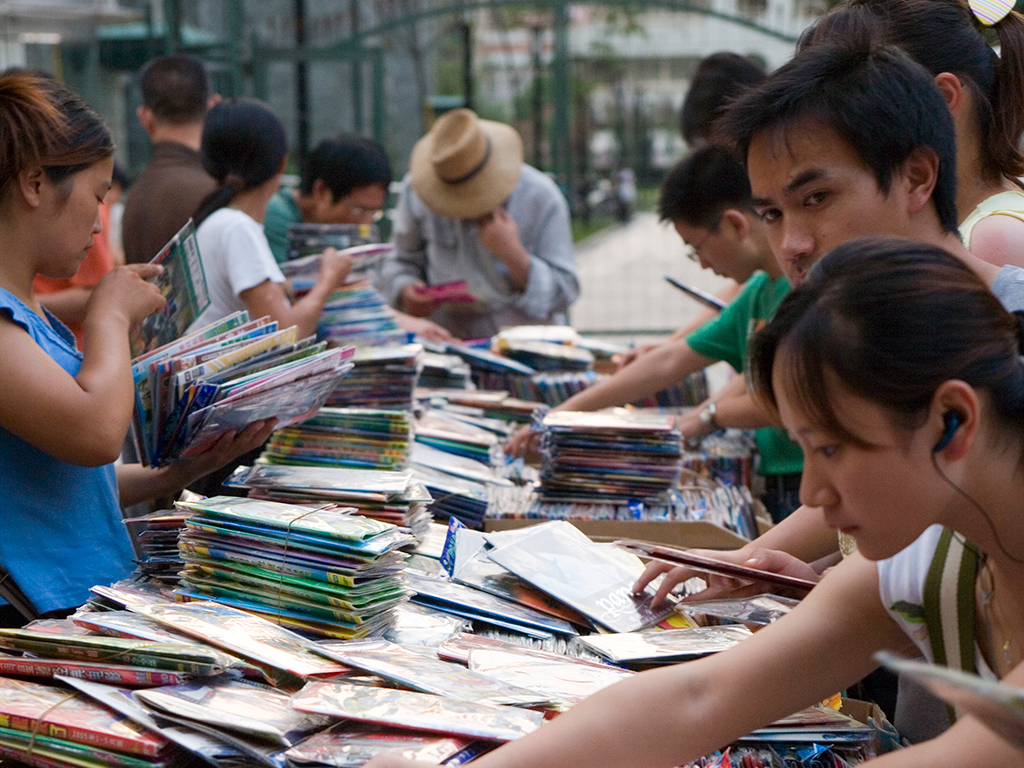 Pirate DVDs on display at a market in Shanghai. China may have the highest rate of DVD piracy in the world

Jeff Bewkes, CEO of Time Warner, was recorded in February this year as saying he offered the Chinese government “all our stuff to your people for free, but how about you donít reship it to every country around the region?” Bewkes’ statement, in effect, amounts to one of the worldís biggest media conglomerates writing off the worldís most populous nation in sole exchange for the bettering of piracy prevention laws.

An estimated 95 percent of Time Warner films watched in China are being either illegally downloaded or resold as counterfeit equivalents. At present, countless other US companies – most of which are much more vulnerable than Time Warner – are falling foul of similar acts. As China continues to prosper, the US grows increasingly powerless in its efforts to pressure the Chinese government into better enforcing copyright laws and stamping out piracy.

Time Warner’s attempt to curb Chinese copyright infringement is representative of wider US efforts to suppress the growing threat of piracy emanating from the country. Such infringement is an intractable problem in China, and its continued perpetration is having damaging repercussions on the US economy.

Reuters claims Chinese piracy and counterfeiting costs the US economy $48m a year – and that, if it could be combatted, could allow for the creation of a further 2.1 million US jobs. The prospect of offering free film and TV products would undoubtedly allow Time Warner to better infiltrate the Chinese market, though it’s hard to comprehend how the plan could be viable on an economic scale.

Priorities in order
Bewkes’ deal is based on a number of assumptions, one being that the Chinese government has the ability – or the willingness – to halt the production and circulation of pirated materials. Itís true that the methods and sentences by which piracy is punishable are contributing towards the circulation of counterfeit goods. These are measures the government is within its right to change, but would the tightening of copyright laws benefit the Chinese economy?

The Chinese government, above all else, seeks to foster and to develop key industries and state-owned champions over the protection and upholding of IP rights. It demonstrates a vein of leniency in the punishing of copyright infringement, because these offences contribute to the development of the Chinese economy.

By offering content for free to a nation of 1.3 billion people, Time Warner is, in essence, undermining its own pricing structure. If the company was to offer free content to the most populous nation on Earth, there could potentially be gross ramifications in the perceived value of Time Warner products.

Individual and intellectual property is not attributed to the individual, but interpreted as an offering to the community

This isn’t the first of Time Warnerís attempts to better negotiate a highly polluted Chinese market. In 2006, the company attempted to undercut Chinese movie pirates by reducing DVD prices to the equivalent of $3. The company – operating under the name Warner China, a partnership between Warner Bros, China Film Group and Hengdian Group – presented an adaptable and unorthodox method in that DVD releases were made available only days after the cinema release.

Whereas the pricing and immediacy of the DVDs was unmatched by any legitimate US media conglomerate, the $3 price tag was considerably more expensive than the $1-1.50 average available to those purchasing counterfeit versions on the Chinese market. Time Warner mistakenly placed faith in the Chinese consumer’s willingness to invest in a legal, premium product.

China’s leniency towards copyright infringement is not a criminal disregard for copyrighting law: it is the result of cultural tendencies in which individual and intellectual property is not attributed to the individual, but interpreted as an offering to the community.

Tackling a new market
Perhaps the most important lesson to be taken from this scheme is that rival US companies were willing to put aside western business philosophies in exchange for an opportunity to better infiltrate the elusive Chinese market. This lesson was best demonstrated by the partnership between rivals Warner Bros and Paramount – their reason for partnering being that, in China, the competition is with pirates and not with each other.

Ultimately – as has been suggested by Bewkes’ more recent proposition – selling for a little is better than not selling at all. Acting as a further incentive for related companies is the fact that legitimate sales help bolster DVD sales figures; an important aspect when considering the continuing decline in disc sales.

In addition to street-level copyright infringements, entities in China have been held responsible for far more sophisticated means of piracy, largely in the form of computer hacking breaches and the subjecting of Western companies to malicious software.

Already this year, a host of large US companies have fallen foul of computer breaches, most notably Facebook and Twitter – both of which have experienced malicious software intrusions – but also Apple, whose computers were hacked at its California offices. Such breaches are an attempt to obtain data of high commercial or military value.

It’s likely that such cyber attacks are a more frequent occurrence than is widely reported, as most are left unlisted for fear of a business appearing vulnerable to further hacks – thereby eroding its reputation with customers.

Unit 61398
US-based security company Mandiant claims to have traced these cyber attacks to a state-run office building in Shanghai. It says Unit 61398, occupied by the People’s Liberation Army, is believed to have ìsystematically stolen hundreds of terabytes of dataî from over 140 global organisations.

Mandiant suspects hacking activities at Unit 61398 have been in operation since 2006 and considers it one of the most prolific hacking groups worldwide “in terms of quantity of information stolen”. China has since questioned the validity of these investigations and has strongly denied knowing of any such hacking activity.

The US has repeatedly raised concerns about cyber attacks – many of which were traced back to China – and looked to pursue those responsible for this latest string of breaches. Having started strongly in 2013, the US appears intent on clamping down on piracy, and will be prosecuting China’s Xiang Li – who was found guilty of stealing $100m worth of high-end software – and shutting down Gougou.com, a Chinese pirate search engine.

Ultimately, the abundance of internet piracy, as well as the rampant selling of counterfeit goods, is crippling the means by which Time Warner can register consumer interest in its products. It is clear why Time Warner is steadfast in its determination to – at least in part – find innovative ways to stamp out piracy.