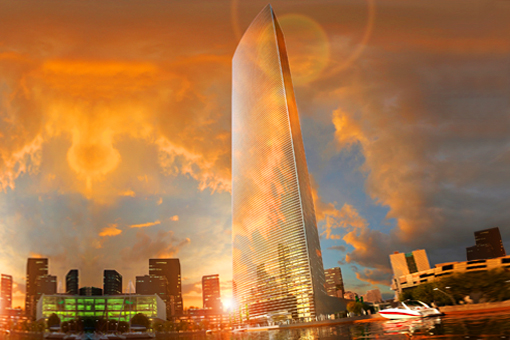 While most of Plantagon’s work to date has involved research, planning, and project proposals, the company has recently begun construction on its first project – a vertical urban greenhouse. The greenhouse is being constructed in Linkoping, Sweden and will be finished in 12 to 16 months. During the groundbreaking ceremony, CEO Hans Hassle said that the construction “marks the realisation of the vision of creating sustainable solutions for the growing cities of today and tomorrow, where we can grow food in the cities in a resource-smart way, making use of the special conditions of the city.”

The greenhouse will be the first attempt at constructing the model Plantagon developed in 2009, which features a spherical, translucent globe with a spiral ramp. Robots will maintain the greenhouse itself and, as the sun moves across the sky, its light will penetrate all levels of the greenhouse at varying degrees, even during the winter when sunlight levels are low. The greenhouse’s dome shape allows it to be inserted in any city. Plantagon intends to grow 15 types of leafy Asian vegetables in the greenhouse.

Plantagon was founded on the principle of working in harmony with the earth and its resources, rather than against them. The corporation operates on the principle that humans “cannot continue business as usual if we want to survive”, and that corporations should be “built from a deep sense of responsibility for the common good.” To that end, the corporation’s projects all involve urban farming and sustainable living. The company’s ultimate goal is to effect change by influencing existing corporations to adapt their business practices to benefit the earth and, ultimately, humankind.

The company offers several services based on environmental farming and development, including research and studies for farm planning, construction design, cost management for projects, manufacturing components, and post-construction reviews. All of these services are designed to provide urban agriculture that blends in with existing city landscapes.

Plantagon was founded through a joint agreement between SWECORP Citizenship AB and the Onondaga Nation in the US. Hans Hassle is based in Stockholm and joined the company during its initial development in 2008. Hassle has been involved in corporate social responsibility work since 1986.

Plantagon and Hassle have received numerous awards and recognition for their work in the sustainable farming industry. In 2009, the company won the International Globe Forum Sustainable Innovation Competition for its spherical greenhouse model. Hassle himself was nominated for the Sustainable Leadership Award in 2010, and Plantagon was selected as a finalist for Red Herring’s Top 100 Europe Award in 2011.