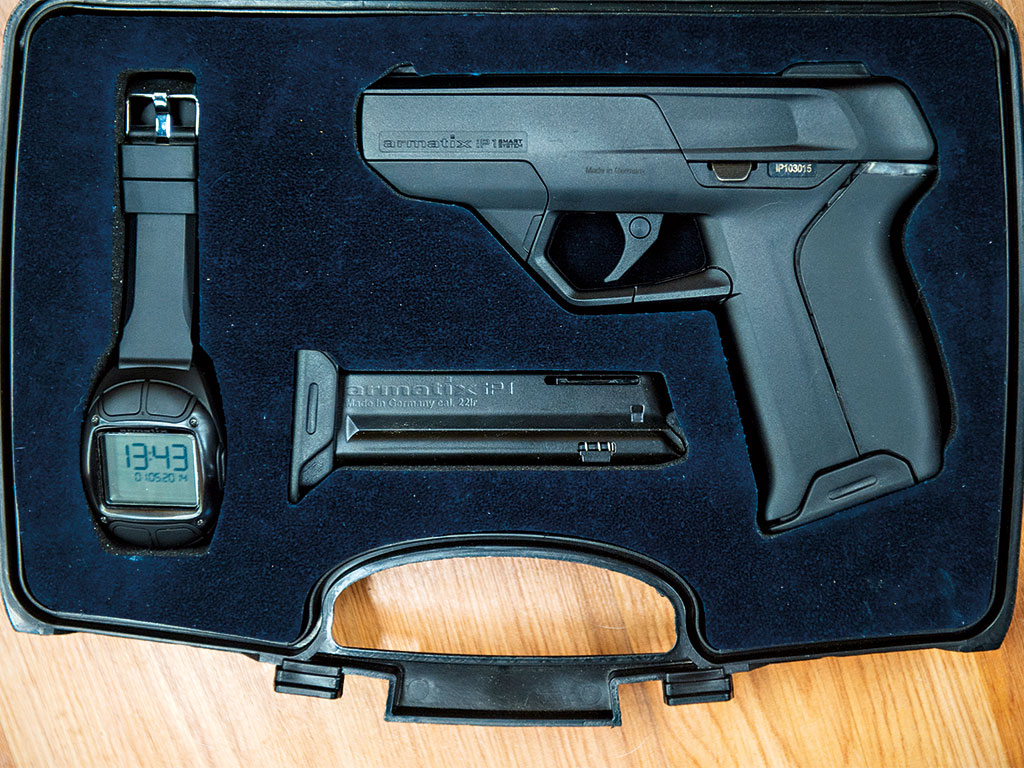 Smart guns feature electronic or biomechanic locks, allowing them to only be fired by a registered user

When US President Barack Obama announced his executive order aimed at reducing the US’ rate of gun violence in 2016, he spoke of attempting to get gunmakers to “update firearms technology”. Alongside expressing a desire for guns to come equipped with the sort of tracking devices now featured in most smartphones – in order to more easily find and secure lost or stolen guns – one of the new technologies the president spoke of was the introduction of guns with biometric locks, or ‘smart guns’.

The basic idea behind a smart gun is that it would be fireable only by designated users. This is chiefly to be made possible through the use of the gun having a record of the intended operator’s fingerprints, with the firearm only becoming operable when gripped by said intended user. The idea is, in many ways, the same as the now-ubiquitous feature on high-end smartphones and tablets, whereby the owner is able to unlock the device through fingerprint recognition. Other, older efforts include firearms that can only be fired when in proximity to a ring or watch worn by the intended shooter.

Uzi lover
The benefits of smart guns are clear. Above all, gun owners can be certain that their own weapon does not fall into the wrong hands. There exist numerous high-profile cases of children getting access to unsecure handguns in private homes, often to tragic ends. At the same time, firearms taken from legal gun owners in burglaries regularly end up being sold on the black market for use by other criminals – after having their serial numbers removed. And, of course, the ultimate fear of any legal gun owner or armed law enforcement officer is having their own weapon – intended to fight off an attack – taken and used against them.

All of these problems could, in theory, be tackled by replacing conventional firearms with smart guns: the young children of gun owners will presumably not be recorded on the enabling biometrics of their firearms, nor will random burglars or the criminals who buy stolen weapons – rendering the gun inoperable. Any weapon removed from a police officer or gun-owner in a confrontation would also be rendered useless.

Not so trigger happy
With such apparent value to both owners of guns and those who campaign against gun violence in the US, it may seem only a short matter of time until smart guns are rolled out across the country and the wider world. However, the idea is actually already a few decades old. As a 2013 National Institute of Justice Research report noted: “Since the mid-1990s, numerous teams have developed firearms with advanced gun safety technology – often called ‘smart guns’ or ‘personalised firearms’ – to varying degrees of technological maturity.”

Jonathan Mossberg – who is part of the family that owns the gun manufacturer OF Mossberg & Sons – claims to be ready to develop a smart handgun that, according to US magazine Mother Jones, he would be able to bring to market with “about $1m for research and development”. Traditional arms manufacturers have, so far, been wary of adopting smart gun technology, with the National Rifle Association having threatened a boycott against gun manufacturer Smith & Wesson in the 2000s for pledging to equip its weapons with high-tech safety features.

It might be expected that established gunmakers will be wary of new digital and high-tech developments in firearms, but even the epicentre of innovation and market disruption is not keen. Indeed, Silicon Valley has been surprisingly cool about the prospects of a smart gun. In the wake of the Sandy Hook school shooting in 2012, Silicon Valley investor Ron Conway announced he would fund start-ups that aimed to improve gun safety – leading Mossberg himself to receive a $100,000 grant – but as of yet, little seems to have come of the initiative.

In spite of this industry reticence, there does seem to be some sort of market for smart guns, with recent research from the Johns Hopkins Bloomberg School of Public Health finding that “nearly 60 percent of Americans, if they buy a new handgun, are willing to purchase a smart or childproof gun”. Yet while this research suggests Americans are open to smart guns, it is by no means sure proof of a big, eager market. While many Americans would perhaps like a smart gun, were one to come to market, certain downsides may perhaps become more obvious, resulting in conventional firearms being favoured.

Sticky fingers
The primary problem is that any added level of technology invariably makes a gun’s use and operation more complicated. And with added complexity comes added potential for something to go wrong. Firstly, adding biometric authorisation to a gun will add the need for some sort of electrical charge – presumably through the use of batteries. This creates the need to maintain sufficient battery levels for operation, and raises the potential for the gun to remain locked should power run out. The prospect of either having a gun reliant on a battery, or even just the added headache of maintaining a battery charge, is likely to put off many gun owners.

Furthermore, biometric scanners require both the detector and the user’s hands to remain clean. Anyone who has had to punch in their smartphone PIN (rather than using the fingerprint ID lock) due to having sticky food residue on their hands can attest to this. The difference is that with a smart gun there is no PIN with which the intended user can bypass the biometric verification. Yet even if there were, the prospect of punching in a four-digit code to unlock a weapon is hardly an appealing prospect when faced with an intruder or attacker.

None of this would matter to recreational shooters, however. For those who enjoy shooting as a sport, guns are intended for use only at certain planned times – certainly this is the case for most gun users in Europe, where private gun ownership is much more limited. But for many gun users in the US, ownership goes beyond that. Owning a gun implies independence from the state, and an ability to ward off intruders or attackers. It is, in some interpretations, a constitutional right and fits with the frontier sprit of self-reliance that defines the national identity for many Americans.

With this purpose of gun ownership in mind – even if the actual likelihood of needing to use a weapon is fairly low – anything that renders a gun potentially useless or more complicated to activate is seen as a reduction in the ability to defend one’s property and loved ones.

As Tom Hartsfield of RealClearScience noted: “The whole point of owning a gun is that you only need to use it in the most extreme situations. You don’t plug your gun into a USB port before going to bed, knowing that tonight is the night that you’ll need it.” A gun that is “hamstrung by special technological conditions to fire is a liability to an owner who keeps it for protection”. Such an attitude to gun ownership may seem alien and even objectionable, but, like it or loathe it, it is an attitude and worldview that any new entrant to the US gun market must take into account if they wish to have any hope of commercial success.