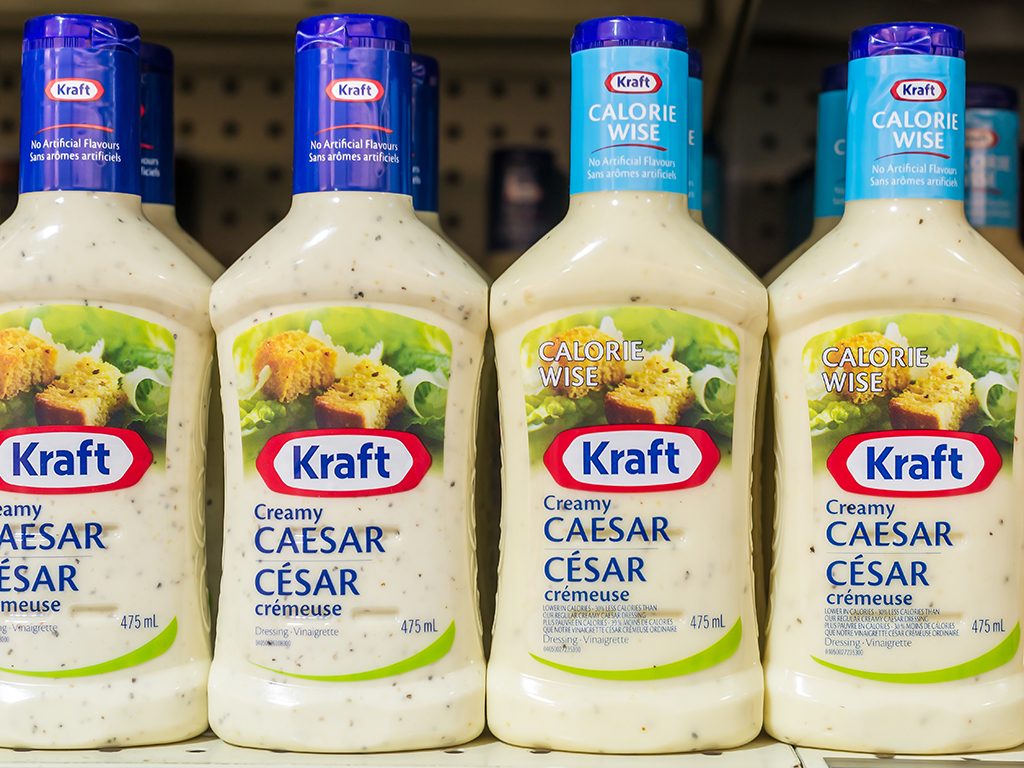 Kraft's Creamy Caesar product. The company has been at the forefront of innovation in the food sector for years, but has recently had to deal with the challenge of changing consumer trends

Kraft has an impressive remit of popular brands under its belt, including Philadelphia, Kool-Aid, Maxwell House, Jell-O and Cool Whip, as well as a wide range of own-label processed cheeses. The multinational company is present in more than 150 countries around the world. Yet despite this impressive reach, Kraft’s 2014 annual report indicated a continuing pattern of disappointing sales for the multi-brand food and beverage conglomerate; net revenue had fallen again, this time by 0.1 percent from the previous year.

Kraft’s recent slowdown is not just because of rising commodity prices, but a result of changing consumer trends that encompass all consumer food brands alike. Similar to some other large corporations feeling the pressure, Kraft is largely stuck in a rut of traditional thinking that has brought success for the food group in the past. As a big company in the modern world, it has fallen behind the evolving tastes of customers, which are the result of a shrinking planet and the digital revolution. Measures taken to combat slowing sales, such as reducing manufacturing overheads and the marketing budget, overall, have been insufficient. In its latest attempt to bolster the business, Kraft has taken to a more drastic approach and announced along with its full year results, a major overhaul of the senior team.

Reorganisation
CEO John Cahill is a newcomer to his role, having been appointed at the end of December in an earlier attempt by Kraft to boost sales. Cahill has already begun making deep-set changes in the organisation; with the new line-up being the first port-of-call in his strategy to rejuvenate the business. As part of the restructure, three senior managers have been replaced, while two senior roles have been created. George Zoghbi has been promoted from vice chairman of operations, R&D, sales and strategy, to the group’s new COO post. “George has led some of the most critical areas of our business and has a proven track record of strong execution and delivering growth. I am confident he is the right person to take on this new role”, said Cahill in a company statement. While Chris Kempczinski, formerly Kraft’s Canadian head, has been appointed in the newly-created EVP of Growth Initiatives role and will work with Zoghbi to develop more innovative strategies. According to a statement made by Kraft, “The newly created leadership positions reflect Kraft’s commitment to accelerating the pace of change and improving execution, and will support the development of a plan that puts the company on a clear path to long-term sustainable growth”. Yet, unless Kraft begins to respond more quickly and effectively to changing consumer trends, the reshuffle will do little to encourage long term revenue growth for the company.

Greater consumer engagement
The rise of the digital age has put people in closer contact with producers than ever before. “The global impact of social media on buying patterns is tremendous, so if companies like Kraft ignore the consumer sentiment that is being experienced on social media, and can’t translate that voice back into R&D, they are going to have a significant problem”, says PV Boccasam, CEO of demand analytics firm, Orchestro. Not only does social media provide a mechanism for tracking changing tastes, it allows a direct means for communication. Through digital platforms, consumers can engage instantly with their favourite, or most hated, brands. As this trend continues to unfold, people have greater expectations in terms of their interaction with producers. An active Twitter account, competitions on Facebook or interactive websites, can satisfy this new need, as well as enhance sales and customer loyalty.

Shift to value
As a result of the multiple implications of the 2008 fiscal crisis and rising costs in general, consumers are choosing better value goods. In effect, there is a smaller demand for branded products, as people are less willing to pay for expensive advertising. “The private label brands are growing three times as fast as national brands”, Boccasam tells The New Economy. “[They] have had a significant impact around how a customer thinks about their basket size or how much they are willing to pay for an overall basket.” Boccasam argues that people are spending less money on non-branded products so that they can purchase goods such as organic vegetables or dairy, thereby prioritising around their lifestyle choices.

This trend is further evidenced by the recent success of discount supermarkets such as Lidl and Aldi, both of which offer much cheaper prices for lesser-known products. The growing demand for private labels and locally sourced food is bad news for big brands, such as those under the Kraft umbrella, that rely on the notoriety of their products, as well as the influence of their marketing campaigns. “Once you get into everyday foodstuffs, you start to see a lot more competition, so the challenge is to carry on charging a premium price. They’ve got to be perceived as higher value all the time, that’s a big challenge for them. That’s even more difficult when you put that in the face of rising costs of raw materials”, says David Jago, Director of Innovation and Insight for market research firm Mintel.

Philadelphia, which is the most famous and profitable brand of cream cheese in the world, is an excellent example of Kraft successfully engaging with consumers and offering greater value. A series of recipe books and an advertising campaign that shows viewers new ways of using Philadelphia appeals to three different food trends, healthy eating, home cooking and cost-effective recipes; an extremely clever strategy. Not only does this broaden the use of the product for the customer, it adds a level of interaction that acts as a superb marketing tool. “From the social media side of things, Philadelphia really stands out as being a big success for them – and a real flagship brand”, Jago tells The New Economy. “That’s an area which doesn’t really happen with private brands and retailers’ own labels. You do see some levels of social engagement but it’s not the same emotional level – you don’t really drill into the consumer psyche and really appeal to an emotional level in the same way that a brand can”. This also explains the continued success of Kraft’s subsidiary Mondelēz, as the appeal of luxury food treats made by favourite brands, such as Cadbury’s chocolate, is psychologically ingrained in customers.

Changing tastes
Generally, shoppers are making healthier choices; there has been a significant increase in the quantity and variety of wholesome products on supermarket shelves to reflect these new preferences. “Consumers are more health literate, given the wealth of information on the internet and discussions on social media. So they are looking for foods and drinks that will optimise their health and, more importantly, make them feel good about their food choices”, says Dr Carrie Ruxton, nutrition consultant and health writer. The growing incidence of obesity and related-ailments across the US and Europe has also contributed to the rising inclination of shoppers choosing to cut back on the foods that are considered bad for them. Recent studies support this trend, such as the 2014 poll carried out by Packaged Facts, in which 39 percent of American consumers indicated that they are eating less processed food as opposed to a few years ago.

Another notable food trend that is causing brands to rethink their product portfolio is caused by globalisation and individuals generally being better-travelled, both of which have resulted in consumers opting for more exotic cuisines. People have become more adventurous with their food and so have their taste buds, as evidenced by the rising popularity of spicy food and condiments. According to Euromonitor, there has been a combined CAGR growth of chilli sauces of around 24 percent over the past five years in Asia Pacific, North America and Western Europe. As such, traditional foods, in particular those which are processed and have high levels or sugar, salt, fat, or all of the above, are less in demand. “Just like apparel and other products, food is now a lifestyle,” says Boccasam; the saying you are what you eat means more to consumers than ever before. With new generations growing up with these evolving trends, it is unlikely that a reversion to the former will occur. Therefore, food producers must embed such changes into the collective consciousness of their organisations, from product development right through to television advertising, so that they can offer customers what they want: more.

Looking ahead
An onerous challenge facing Kraft as a multi-national organisation is catering to the unique trends of each region in which they operate. Particularly given the context of rising commodity prices, it is extremely difficult for a global company such as Kraft to both analyse changing consumer trends and roll out corresponding initiatives across multiple countries simultaneously. “Smaller companies have often been quicker to respond [to changing trends], that’s because they are not trying to appeal to such an international audience; with a much smaller set of core consumers it’s much easier to follow them and to adapt to them”, says Jago. Kraft’s target customer base could also be another reason for its slowing revenue growth. By focusing on highly developed markets in Europe and North America, Kraft is significantly restricting its growth potential. Multinational companies such as Unilever and Nestle on the other hand have focused more so on less mature markets, and in doing so have successfully tapped into a broader customer base. This could be a key area for Kraft also; namely, exploring new markets so as to achieve faster revenue growth.

Given the impact of changing shopping behaviour, it is increasingly important for companies to carry out consumer analysis so that they are swiftly in tune with upcoming shifts and can respond to them accordingly. Social media provides the perfect platform for leading consumer brands to do so and to have a direct line with their customers. The digital revolution may have caused some teething problems for established brands in its early years, but it now being used more and more by businesses to achieve marketing schemes that were never possible before.

In order to boost its profitability to former levels, it is vital for Kraft to depart from the traditional mindset that has been successful for decades, and look to the future. Cutting costs has been successful in some areas of the business, such as refrigerated meals and cheese, but this is not enough to enhance sales and promote sustainable profit growth. Brands are now required to engage more so with customers and meet their changing needs. The approach taken with Philadelphia is an estimable example of how this can be achieved. With greater marketing creativity and a portfolio of value-added products, Kraft can re-establish itself as a leader in packaged consumer food and drinks. Perhaps the drastic reshuffle implemented by Cahill is exactly what is needed to bring a fresh outlook and new impetus to the company.